The 2008 Annual General Meeting was held in Yanchep on the 16th February. Jim Cole was elected as President, Vicki Smith was re-elected Treasurer. The position of Secretary was left vacant.

The recipient of the Tail End Charlie Award was presented to Neville Thompson for his commitment and work in organising the Eastern States Branch. 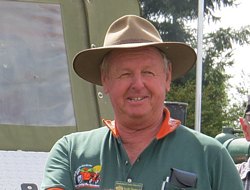