The 2016 AGM was held on Saturday, 6th February at the New Norcia Hotel in very pleasant surroundings, with 35 Members in attendance.The Management Committee remains mostly unchanged, with Rose Harrington and Barbara Garnett welcomed to the ranks.

A report on the Alice Springs Trek which was undertaken last August/September was given and it was agreed that this was a very good trek, sometimes under challenging road conditions.

In view of the suspension of plans to undertake the Savannah Way in 2016, discussion took place about the prospect of running a ‘hop-on-hop-off’ up the WA coast with enough time at various camps to ‘smell the ocean’. Two members have undertaken the job of preparing an itinerary for this trek in August and it is expected to appeal to many members as an opportunity to see some of the state without needing to commit to many weeks away. The return journey is expected to travel inland by which time the wildflowers should be in profusion.

Four members qualified for the ’15 year Name Badge’ – Bruce and Joan Heinrich from NSW and Bob King and Harry James from WA. The ‘Tail End Charlie’ award was presented to Dick and Barbara Garnett in recognition of their ongoing commitment to the club and tireless work on treks.

All Club members and any prospective new members who would like to be a part of this trek, please email the club direct on chamberlain9g@westnet.com.au 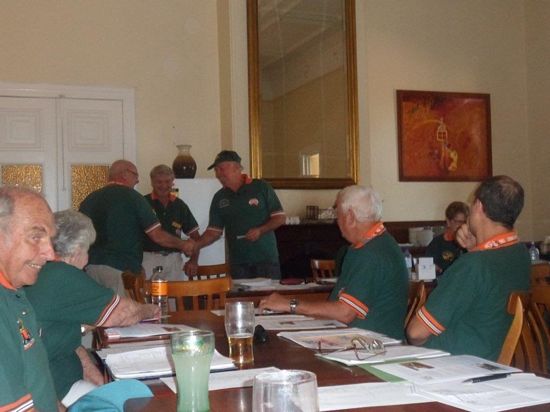 Harry James is presented with 15 Year Badge by Cumber

A small trophy was awarded to Allan Faulkner for his great work as the Trek Leader on the Alice Springs Trek. 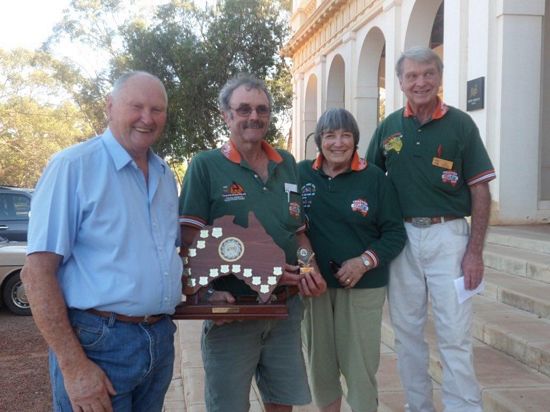