The venue for the Chamberlain 9G Tractor Club’s AGM this year was the historic Settler’s House on Avon Terrace in York.  There were 22 members present at the meeting which was held on Saturday, February 11th 2017.  Unfortunately, several members from the Southern Region were unable to attend due to widespread flooding, which caused many roads to be closed.  The Avon River in York was also rising and those in our group who were planning to camp overnight alongside the river were advised to move to higher ground.

Awarded to Allan Faulkner for 2016 in recognition of his continual commitment and service to the Club, especially for his trek organisation ability and leadership 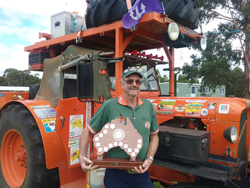 The Eastern States Branch members plan to depart from various location to arrive at Raglan for the Old Station Fly in Fly out Air Show, tractor pull and various other events on May 27th 2017.

The WA trekkers plan to meet on September 2nd at Northam where the National Ballooning Championships 2017 are being held.  This trek is estimated to take 30 days and cover some 2,000 klms around the Southern areas of the State.