A group of enthusiastic members met at Dick and Barb Garnett’s Willemenup property in Gnowangerup on Wednesday 2 September. After enjoying a few pre-dinner drinks around the fire we moved inside for a delicious meal kindly supplied and prepared by Barb.

We set off to travel through the Stirling Range the following morning, stopping off to visit the old Toolbrunup School along the way and also Red Gum Springs. Although there was some beautiful scenery as we made our way through the Range, it was obvious that the bush was still recovering from the fire that had passed through twelve months ago.

We arrived at Mt Trio Bush Caravan Park at approximately 3pm. This was a great little park offering very comfortable facilities and is a wildflower, birdlife and walking hot spot. Some members took advantage of this and booked in for the wildflower/orchid guided walk the following morning. After leaving Mt. Trio we headed for Tozer’s Bush Camp, stopping along the way to visit the ‘Lily’ Dutch Windmill then later stopping off for lunch at Amelup.

The bays at Tozer’s Bush Camp were nestled in amongst natural bushland. There was a very spacious and spotless ablution/camp kitchen area which we all made good use of. Some members took advantage of another guided wildflower tour while others were able to go on a self-guided tour along the path on the outskirts of the caravan park.

From here we continued on to Bremer Bay. Prior to booking in to the caravan park we visited the Wellstead Museum for a tour and an excellent lunch. We were welcomed by Max Wellstead who then gave us a guided tour of the museum. There was such a huge variety of items on display it was impossible to see everything in the short time we were there. A second visit is definitely on our list of things to do.

Soon after entering the Fitzgerald National Park we made our way to Pt Anne where we tried to photograph the whales (you have to be quick!) We continued on and camped at Fitzgerald River Camp Site. Several more members joined the group at this camp site (just as the rain came down).

We awoke to a damp morning however we were all soon on the road and heading in to Ravensthorpe. There was a quick stop on the outskirts of town so the homemade wildflower decorations could be attached to the tractors.

There was no shortage of things to see and do in Ravensthorpe and Hopetoun and everyone was free to choose how they spent their time while there.

We attended the official opening of the Ravensthorpe Flower Show along with special guests Will Yeoman and Sabrina Hahn. We had a choice of tag-along tours available, sightseeing and wildflowers in the Fitzgerald National Park, Farm Gate Art and lots more.

While in Hopetoun we all joined in to another tag-along tour kindly organised by Allan Faulkner, with Moira and Peter McMahon as our guides. Apart from visiting some great locations, Peter explained the process of collecting the wildflower seeds (under licence). We all appreciated Moira and Peter taking the time to share their knowledge with us.

On Saturday 12th we all went along to visit another place of interest which was the Rusty Relic Open Shed on the property of Colin Hughes and Sue Leighton. Great collection of vehicles and collectables.

After a busy few days we left Hopetoun and made our way along the Southern Ocean Road to our next campsite at Starvation Bay. From here we headed to Lake King via Lillian Stokes bush camp site. This camp was a devastating sight, having been totally burnt out. Such a huge contrast from a previous visit when it was all very lush and green.

We stopped off the one night at Holland Tank campsite after leaving Lake King.

Pingrup community was very welcoming and it was here that we caught up briefly with Jack Bock. Tim and Vicki O’Neill, Mick Creagh and Butch Lutley travelled across from Ongerup to join us around the camp fire for tea.  A member from the local Lion’s Club, made a special trip in to town to cook us a fantastic damper the following morning (for morning tea) before we left to travel on to Nyabing. We decided to stay the night in Nyabing and had our last camp fire for the trek.

The following morning we travelled to Katanning to attend the Tracmach field day. Although the weather was extremely cold we had a wander around the many displays. There was a great variety of food available in the pavilion so we made our way there for lunch by the fire. By mid-afternoon our group had dispersed and we were all on the road again returning to our various homes.

Thank you Dick, Allan and Cedar for again being so generous with your time and for organising such an interesting and enjoyable wildflower trek. 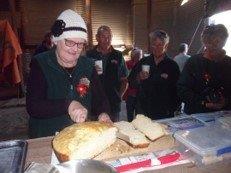 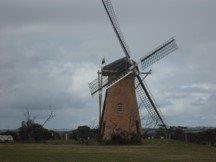 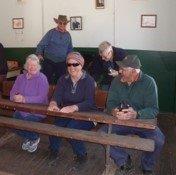 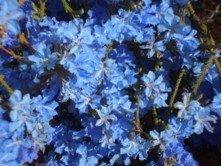