Camping at Hyden was next to the oval with use of the toilet/shower facilities at our disposal. The famous Wave Rock was visited as were other points of interest in the town. The two days of rest and recreation in this lovely town prepared us all for the start of the next stage of our trip.

Then the start of the actual Holland Track. Although there were a series of mud filled holes, the track presented no difficulties to the vehicles. First overnight stop was at Mount Holland where a community Fathers’ Day dinner was enjoyed. A quick visit was made to the site of the Bounty Gold mine, then along to camps at Centenary Rock and Cave Rock.

The sights at Cave Rock were well worth the climbing of the hill, the walk to the dams and the clambering up into the caves – a great spot.

Onwards again, this time an elusive road was finally found and we duly arrived at Burra Rock where a climb to the top of the rock was too much to resist. The water in the dam at the base of the rock however was too cold for one member to proceed past the stage of the shedding of clothes. (enough said!)

The final stretch of the Track followed the old train line with much evidence of the stopping points and camps used by the workers. Overall a wonderful stretch of history with much admiration for Holland and his team who blazed their way through the virgin bush.

At Coolgardie we were given a royal reception, with a welcome from the Shire CEO and the provision of afternoon tea in the Shire Hall. After the overnight at the Caravan Park, the Museum was on the agenda and it proved to be an excellent presentation of the activities of life and conditions in the early days of mining and the town’s growth.

The local school was visited with the mandatory checking of horns and sirens by the children.

A tour of the local gold battery followed with a local prospector’s sample being processed as we watched – very interesting, but no samples!

The next day a visit to the Aboriginal School occurred, with the usual enthusiastic attempts to test every switch, button and lever they could find on the Tractors.Being September 11th, it was appropriate to include a reference to the occasion and observe a minute’s silence in memory of those who perished.

The children were fascinated to see where previous Treks had crossed Australia and toured the North West.

Heading northwards, we arrived at Ora Banda, visited the pub and the remains of the gold battery – they certainly made a good job of its demolition.

An overnight at Rowles Lagoon was followed by a visit to the Croesus Mine     operation at Daveyhurst where we viewed the open cut operation and were privileged to witness a gold pour. After lunch at the mine, the next stop was Ollie and Connie’s retreat ‘somewhere in the bush near Menzies’. An array of mining and general collector’s items spread over seven acres, with living accommodation built and added to over many years, provided an interesting stop-over.

Moving along, we arrived at Lake Ballard and camped next to the lakeside, much to the amazement of some other couples who may have had visions of a quiet, private overnight getaway. Tramping around the lake that evening with a full moon to illuminate the way; locating and taking photos of some of the figures proved interesting, if only to study the artist’s interpretation of the male and female figures.

The trip down to Kalgoorlie via the Broad Arrow Pub (great hamburgers!) was uneventful with the destination being the Boulder Accommodation Village for the next three nights.

Many places of interest were visited, including the Mining Museum and Langtrees, the local brothel (did some-one really pinch the love chair?)

The School of the Air premises were visited to show the tractors to the station children who were participating in some R & R in Kalgoorlie. A group of Tractors returned to Coolgardie for their street parade on Coolgardie Day and made a great contribution to the atmosphere of the occasion. The Boulder Accommodation Village donated all site fees paid by the Trekkers to the RFDS, Kalgoorlie.

Next, across the Transline, where we became involved with the Variety Club Bash ‘bashers’ at Karonie. We enjoyed each others company, sold them some merchandise and then fortunately went our separate ways after lunch.

An overnight stop at Zanthus saw us up bright and early for the next stop at Kanandah Station. A great meal was provided, the proceeds from which went to the Isolated Childrens Parents’ Association. Other station people, kangaroo shooters etc were also present and an enjoyable evening eventuated.

Next day the destination was Rawlinna and after visiting the old Rawlinna townsite, it was morning tea time at the Rawlinna Station.

What a wonderful homestead; local stone, polished wooden floors, flyscreen enclosed verandahs all around – it was just a great place.

The Shearing Shed, capable of running 16 stands and shearing facilities to cope with 70,000 sheep, was next on our visiting list.

The road system throughout this area was challenging to both vehicle and occupants and with some degree of uncertainty about the distance to be covered, the compass was directed towards Arubiddy Station.

Another night of great hospitality from our hosts with food made available at a small cost and provision of hot showers etc almost made the bad track worthwhile. A ‘fines’ session added much hilarity to the evening and added to the dollars raised for Cancer and Leukemia in Children.

A trip into Cocklebiddy, a look into the amazing Nullarbor caves and then on to the Eyre Bird Observatory which provided some different driving conditions. From corrugated gravel sections, to a boulder strewn track down an escarpment, finishing with deep sand tracks down to the Observatory, didn’t however present any problems. Two of the tractors dragged tyres etc behind them to smooth out the sandy track for the Sanctuary operators.

The beach at Eyre was our first sight of the coast and proved irresistible to the Tractor Drivers.Another night at Arubiddy was needed to finish the abundance of food made available and then it was the start of the journey westward from Cocklebiddy.

An overnight bush camp, then arrival in Balladonia. After refueling etc, farewells were made as some members were returning home and the main group heading towards Esperance

After a bush camp off the Eyre Highway, the trekkers turned onto Parmango Road and headed into the Deralinya Bush Camp; a magic place with historic buildings and an array of artifacts and bush paraphernalia, and surrounded by old corrals (used to trap brumbies), shady trees, and a dam with an abundance of birdlife, wildflowers and nice supply of quandongs.

An early arrival at Deralinya allowed time for a group to visit the pioneer homestead settled by the Brookes family. A tour of the historic buildings in the area, some of which have been reconstructed by a LEAP program for unemployed youth, reinforced the hard times of the locals of a bygone era

The first campfires for a while and campers settled in for a chin wag and feed around the fires when the sky began to open and sent some trekkers scurrying with the curry back to their little dining rooms. The dust is all washed off overnight and the morning brings a day of traveling through farmland which was the last land release in the area about 15 years ago. Interesting tales of Orleans Bull sales which used to be held in the area and local knowledge made for an enjoyable trip towards Condingup. The first port of call was the Tavern which also houses the general store. A poster depicting the 9G Tractors outside the Birdsville Hotel adorned a prominent place over the bar which made the trekkers feel quite at home.

The numbers are fewer but the enthusiasm remain as great as ever.

The Condingup Community recreation grounds and modern building with full   facilities were provided for the Club’s use, including a fully serviced kitchen. In true country style, the towns folk put on an afternoon tea to remember and a BBQ that evening with all money raised going to the local ambulance station. With approximately $500 being raised and with another fundraiser the following weekend, a new wheelchair designed for the ambulance was purchased.

Many took the chance to see the coastline a short distance away, where there are wildflowers growing right up the waters edge in the harshest of conditions.

The last day on the road and what a fantastic tour through the Cape Le Grande National Park which boasts the most spectacular coastline in Australia; crispy white sands and sparkling azure blue waters. Following the lunch stop at picturesque Lucky Bay, the next stop was at Bandy Creek to view the array of fishing trawlers tied up in the protective waters of the creek.

Finally we arrive in Esperance and a perfunctory tour of the town centre with horns, bells and flags and all the fun of the fare. The official end of the trek was Henderson’s place with everything provided for a comfortable stay in scenic   surroundings.

Now the Hendersons have a shed – no ordinary shed – more like a museum with more tools and bits and pieces than you could poke a stick at.

Some trekkers, mainly the male of the species along with a few good women, were treated to a tour of Condingup wreckers – just like children in a candy store ! Row upon row of tractor parts and other things of interest, great staff and even an office girl who took ‘Bugger’ for a run!

A tour along the Esperance Coast Road to take in the Pink Lake and view the wind turbines which supply a percentage of the town’s electricity. A caterpillar of orange tractors along the Esperance coast is a sight to see and received as many looks as the scenery.

A sneak into the Esperance Harbour was arranged and it was impressive indeed.

Now for the final photo session and what better place than the Harbour with the container ships in the background. The Pier Hotel just happened to be just across the road and a great lunch of culinary delight was enjoyed there

On the final evening old friends joined in and a special guest was welcomed in the previous owner of Balladonia Station, Mr John Crocker. John gave us the history of the station and an insight into station life on the Nullarbor Plain.

Ken and Zandra rang the bell with two balls for the last time and brought         together a night of fun, laughter, food, wine, beer and frivolity. A good time was had by all. A fantastic night with presentations and appreciation to all concerned in getting this trip under way and all the organisation 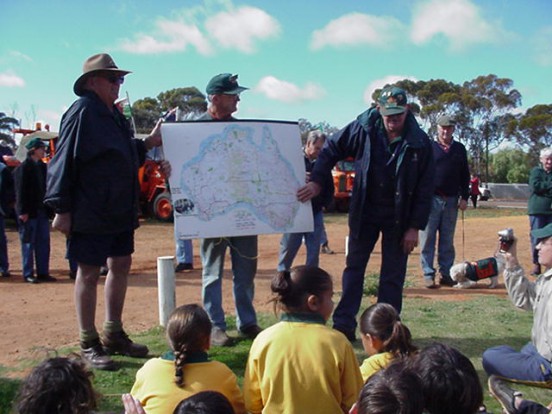 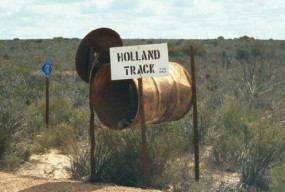 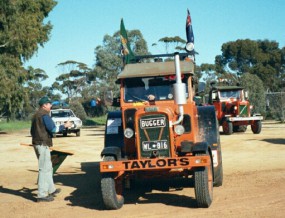 Start of trek at Hyden 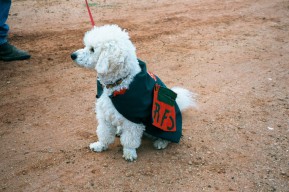 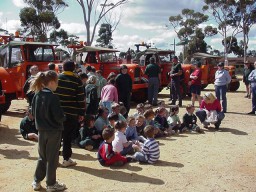 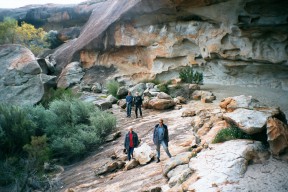 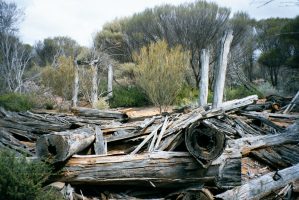 Remains on the Woodlines, Holland Track 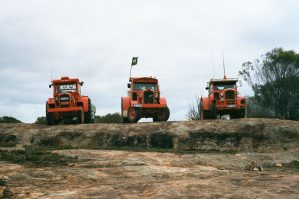 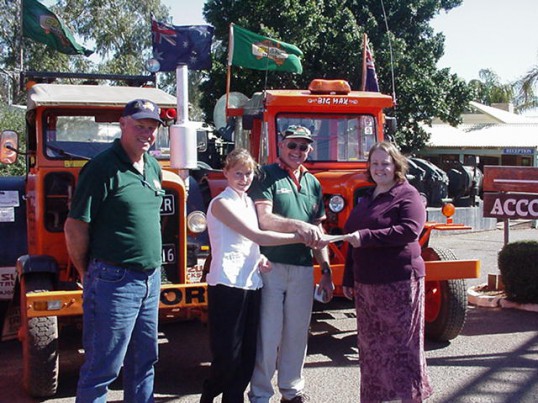 resentation of cheque to RFDS at Boulder 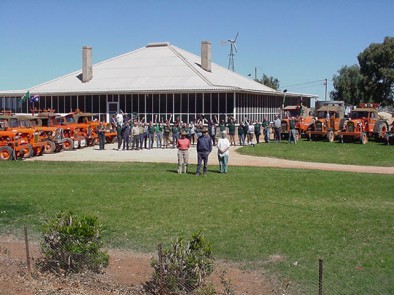 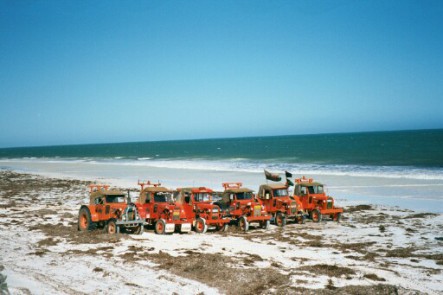 On the south coast at Eyre Bird Conservatory 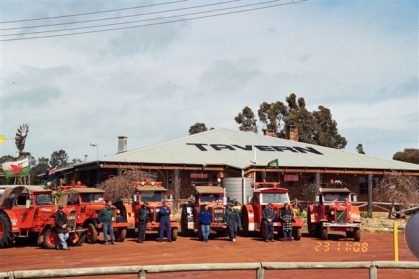 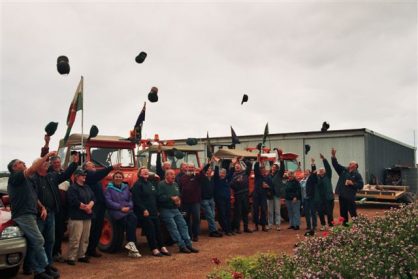