At the end of the New Zealand South Island trek in 2014, we (George & Anne) along with Cumber made arrangements to store our tractors (and the Bass caravan) in Christchurch with the intention of returning within 12 months to complete a trek of the North Island before shipping the tractors back to Fremantle.

As things go in life, whilst there were plans in place, the 12 months ‘snuck up’ and life was VERY hectic but finally on the 10th April 2015 the day came to depart Perth for Christchurch.

Accompanying us for the North Island trek was Annette Robinson from Perth.

On arrival in Christchurch we headed straight for the properties where the tractors & caravan were stored. We were all keen to see if the tractors would ‘fire up’ & if the caravan had survived the winter without any issues!!!! Much to our pleasure the good old 9G’s didn’t let us down & were ready to hit the road without issue. 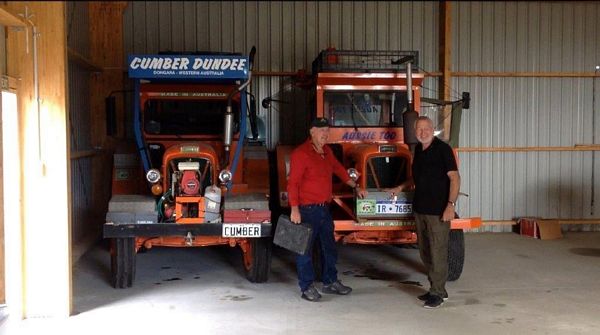 Then it was off to get the caravan which as it turned out also pleased us no end by being exactly as we had left it in 2014 baring a flat tyre which was repaired in no time.
Feeling more than pleased with everything we went back in to Christchurch to spend the night so that we could stock up ready for our trip north towards Picton the next morning.
Before departing Christchurch on the 13th April we met with Tanya from the Children’s Cancer Foundation to get some collection tins so that we could continue the fund raising that the Trekkers began during our South Island trek 2014. 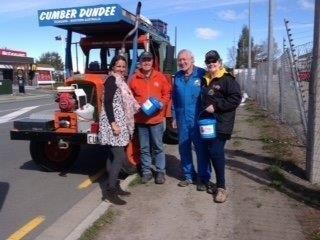 Fund Raising gets under way in NZ

The trip north from Christchurch to Picton was great albeit very cold with some stormy weather and unpredicted snow falls. At one point we were travelling along with the ocean on one side of us and snow-capped mountains on the other side – a beautiful sight 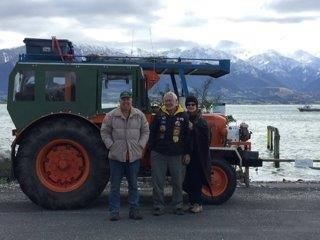 South Island was cold and stormy

Our crossing from Picton to Wellington was delayed due to weather but once under way went without issue.

In Wellington we touched base with the shipping agents to ensure that all was in place for our return shipping & confirmed that we could ship out of Auckland at the completion of our trek. We then took the opportunity to enjoy the sights and sounds of the city.

Whilst we chose not to have a hard and fast route to follow for our North Island trek, allowing us to be able to stop off & see things as we travelled along, we had drawn up a ‘mud map’ as a guide so that we could cover as much of the Island as possible in the time we had.

On leaving Wellington we passed through Levin then on to Foxton where we stayed overnight; this was a lovely little town with some beautiful murals on the buildings. Then it was on to Wanganui where Barbara & Dick Garnett joined us.

As we continued along towards New Plymouth, at Okato it was great to see Steve Day coming down the road to meet us. Steve had been keeping in touch with us along the way and giving us lots of tips and information which he continued to do throughout our time in New Zealand – we looked forward to your daily texts Steve J. As we have acknowledged before, we again thank Steve & Debbie for all they did for us & for their wonderful hospitality, especially while we were in New Plymouth. We thoroughly enjoyed our time with them & the great sightseeing ‘tour’, it is always nice to have a ‘local guide’. Thank you so much Debbie & Steve.

On leaving NP we took the Forgotten Highway through gorges, mountains, rolling valleys – just amazing scenery – with great climbs and descents. We called at the historic Whangamomona Hotel for lunch then went on to our overnight at Taumarunui. This certainly was a memorable day for all of us. 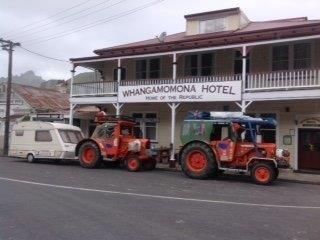 From Taumarunui we continued on towards Tuopo through Turangi, the wonderful scenery just went on and on.

We celebrated the 100th Anniversary of ANZAC at Rotorua at both the Dawn Service on the edge of the lake & then later at the Memorial Service at the Energy Centre – the crowds at both were incredible. It was such an honour to be part of their community on such a special day. 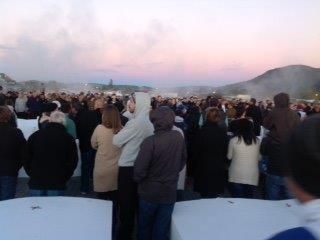 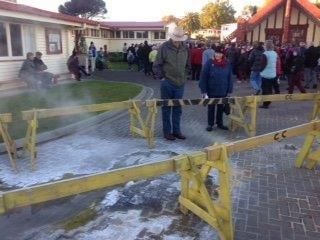 Dick & Barbara at the Rotorua thermals

The autumn colours throughout our trek were absolutely wonderful, a very special time of the year to be travelling in New Zealand. 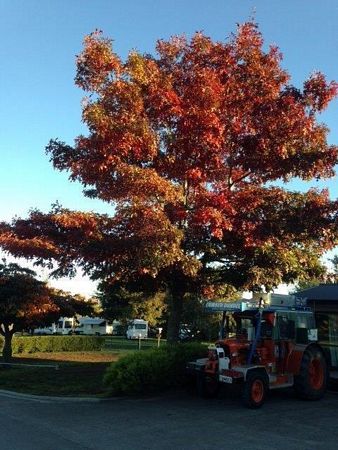