This was a day with three seasons – the morning was cool and sunny and quite spring like with all the colourful wild sunflowers along the roadways.  Then the temperature rose and was recorded at 95 degrees on a clock tower in Colorado Springs.  This warmth kept up until around 4.30pm when a cooler change came in, and then by 5.00pm the clouds were looking very threatening and lightning was evident in the distance.  Then the rain came down for a fairly short time and left the early evening fine but still with heavy threatening clouds.

The fine morning saw the group travel from Limon to Falcon – a relatively short run of 61 miles.  During this trip, the elevation rose on every hill, the highest recording being 6,885 feet.  Then, after booking in at the RV Park and discussing the best sight-seeing options, we were on the road again by 11.00am and headed through the very scenic hills to the Royal Gorge, some 70 miles away.

After entering the Royal Gorge Bridge and Park we walked across the world’s highest suspension bridge, an amazing engineering feat which has been inspiring millions of travelers for 80 years.  This bridge is suspended 1,053 feet above the Arkansas River which attracts many white water rafting enthusiasts, being one of the best stretches of water available for their sport.  We were happy to just watch the cable car cross the gorge, and certainly did not envy those who chose to take the Skycoaster – daredevils who dangle themselves 1,200 feet above the river below and swing back and forth!

As always, time ran away and the planned itinerary was behind schedule.  A visit to the Buckskin Joe Frontier Town was curtailed to a late lunch stop and then it was time to head back to the RV Park.  By this time, the threatening clouds and subsequent rainstorms made the journey rather slow, compounded by the 5.00pm traffic.  Fortunately it was dry at the RV Park, but the forecast is rain over the next day or so. 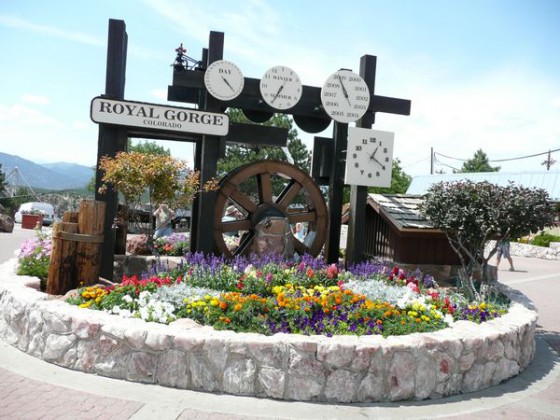 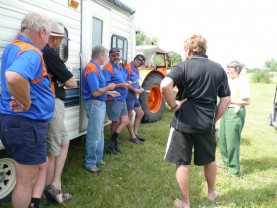 Activitiy planning for the day

Peter on the Suspension Bridge 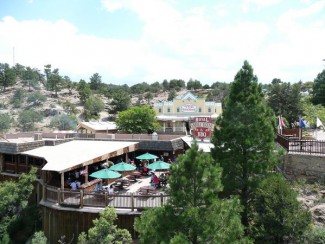 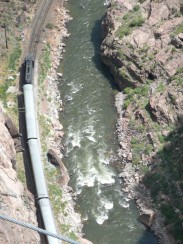 The Royal Gorge Scenic Railway train goes under the brige 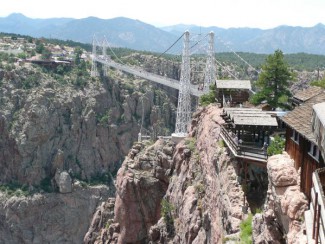 The Suspension Bridge at Royal Gorge

The anticipated showers did not eventuate overnight and it was a pleasant surprise to find the day fine, though still quite cloudy.

In order to be at Manitou by 7.30am to join the 8.00am Cog Railway trip to Pike’s Peak, we needed to leave the RV Park at around 6.30am.  It was quite an achievement when we were actually on the road within ten minutes of this objective, all in the one RV.  Dick and Barbara stayed behind after feeling the effects of the high altitude.

The trip to Manitou went well with the help of ‘Mary’, the friendly GPS and we were in good time for the trip up the very steep mountain.  The Manitou and Pike’s Peak Railway uses the Abt rack system to climb as much as 25 feet for every 100 feet it moves forward.

At the peak, the altitude is 14,115 feet and towards the top the clouds made visibility very poor, and then we experienced a light snow fall and extremely cold conditions.  Fortunately the Pike’s Peak Summit House is ever ready for cold travelers with hot chocolate, all sorts of goodies and the House Specialty – doughnuts cooked on site.  It is said that if you were to take one down to the lower altitude, it would look like a flat biscuit, but ours did not have to experience that fate!  On the other hand, a packet of potato crisps taken up the mountain by Allan looked like a half blown balloon!

While coming back down the mountain, the rain set in and we were all glad we had seen the wonderful views while it was still dry.  These views inspired an American lady by name of Katherine Lee Bates to write a very famous poem ‘America the Beautiful’ which when set to music, lost its bid to become the national anthem to ‘The Star-Spangled Banner’ in 1931.  Hardy folks actually hike up this mountain, usually staying overnight in a half-way house and there are even foot races held which we were informed are usually won in about the same time or less than the train takes.

While out and about, it seemed a shame not to take in another close attraction – the Garden of the Gods, a drive through park where some of the most incredible rock formations can be seen, mostly in red rock, all totally different in their form and all very beautiful.  The park also boasts a Trading Post which is the largest in Colorado and is a real trap for the shopaholics!

Once back at the RV Park Carolyn and Allan were pleased to meet up with relatives, Dave and Maxine Joseph, who had driven from Arkansas to see them.  Then there were interviews with TV and the local press before it was time to head north.  At a little town named Kiowa our appearance was received with shock and surprise – one local said she thought she was seeing things when the first tractor went by, and was absolutely amazed to find there were three!  We stopped to ask directions on the best road to take, and finished up being offered accommodation at the local fairgrounds and enjoyed the company of quite a few of the locals before dining in the local Café. 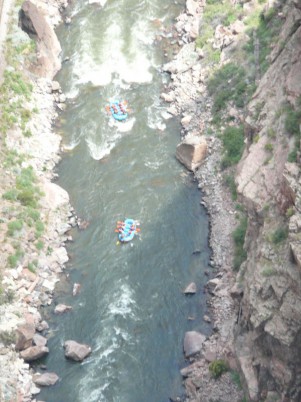 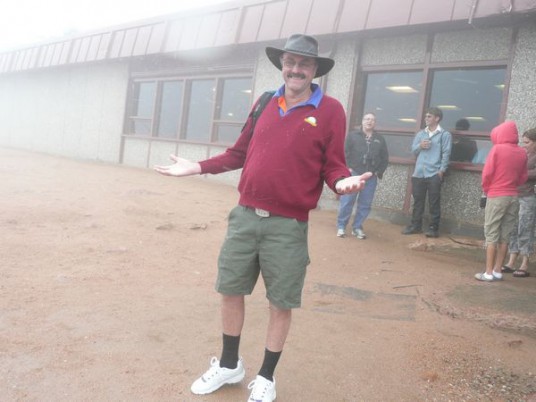 Allan can’t believe it is snowing 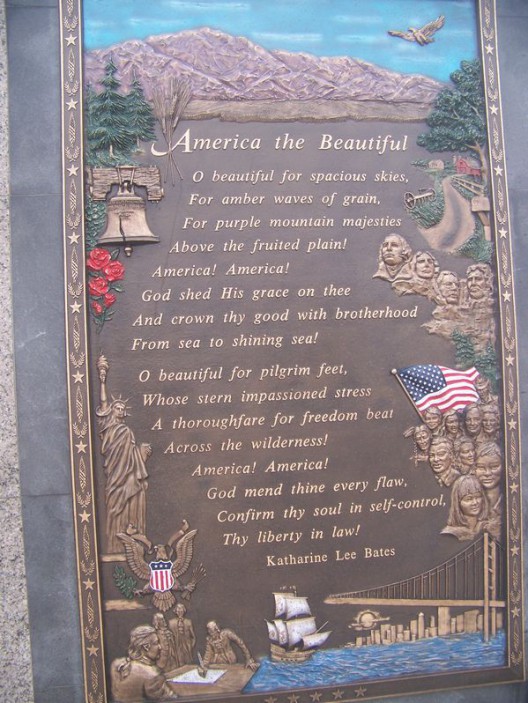 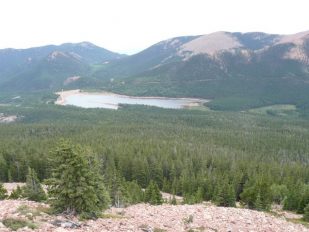 Lake Moraine on trip up to the Peak 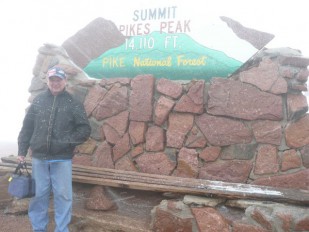 on is quite sure it is freezing 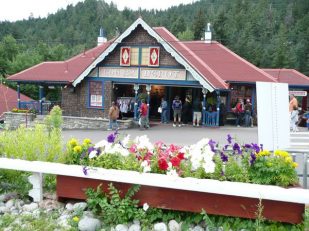 The Cog Railway Station at Manitou 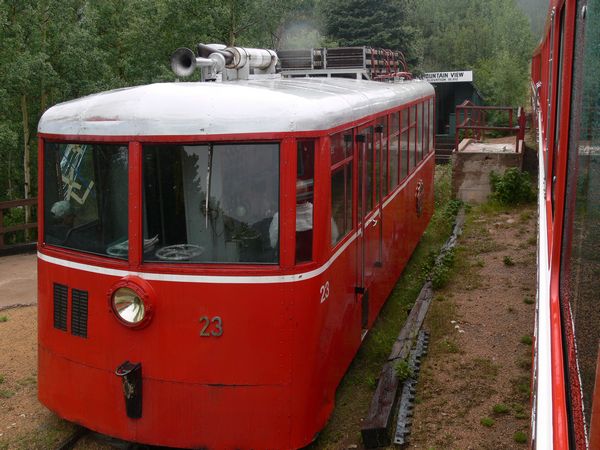 The morning was fine and cool enough to enjoy the drive north on CR194 through Bennett, then 79 to Prospect Valley where the sunflowers were blooming profusely.

After turning left into Route 52  then right into 41, a sign to a Air Museum was seen and the lads could not resist the temptation to visit ‘for a short time’.  Quite some time later they re-appeared saying that the Vintage Aero Flying Museum was ‘absolutely fantastic!’

This museum houses one of the largest collections of WW1, Golden Age and WW2 aviation memorabilia in the world.

The next stop was at Wal Mart in Greeley where it is never hard to waste an hour or two.  Then the short drive to Loveland where we parked in the grounds of the Convention Centre for an overnight stay.  Much to the surprise of those adventuresome lads, there was an Antique Car show on at the centre, and they made the most of the rest of the afternoon to have a good look around these masterpieces of a bygone age. 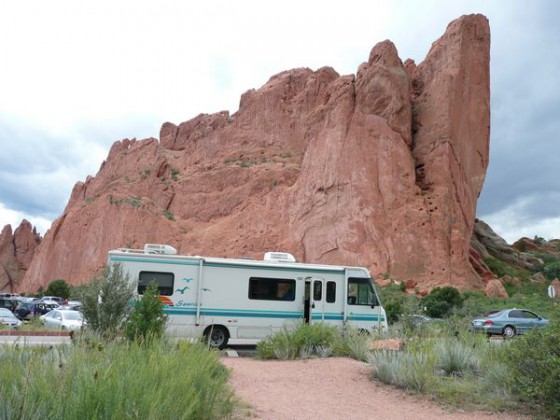 An RV at the Tower of Babel, Garden of the Gods 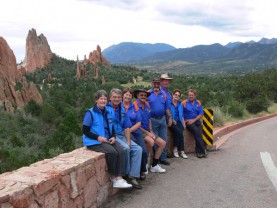 Group at the Garden of the Gods 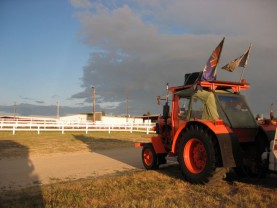 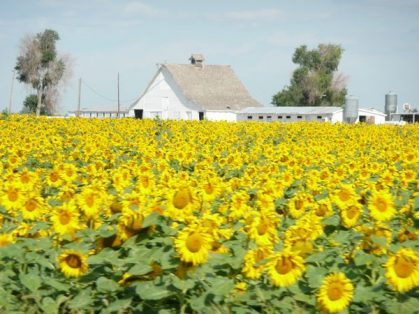 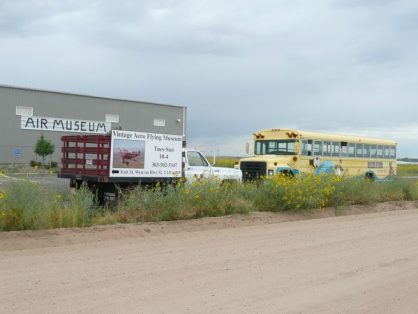