Las Vegas is still giving us a burst of summer with temperatures in excess of 100 degrees F although on checking the weather news we are told that they will begin to drop as the week goes on.

Heat is not spoiling our experiences or enjoyment, this City whilst of course being considered a gambling capital of the world is also a City of entertainment for the whole family.  The hotel complexes are massive and created in so many different architectural designs – there never seems to be a limit to the imagination of those involved in the final result.  Many hours can be spent just wandering and enjoying these beautiful buildings (all comfortably air conditioned of course).

The gondolas rides at the Venetian – with a serenading gondolier – through the Grand Canal transforms you to a wonderful feeling of being right in the heart of Venice not Las Vegas, all under roof but with the magic sensation of being outside.

Bellagio presents a choreographed water show that just blows your mind.  More than 1000 fountains dance to songs made famous by artists such as Frank Sinatra, Luciano Pavarotti, the London Symphony Orchestra and many more, as well as tingling performances of ‘God Bless the USA’.

Wynn has the Lake of Dreams – faces of dreams appear to a combination of light, music and nature to create a fascinating spectacle for those folk in the restaurants and areas surrounding the beautiful lagoon area.

Treasure Islands nightly presentation of a band of pirates attempting to take on beautiful songstresses from the shore comes into action right on the footpaths edge to the pleasure of those passing by. It is an action packed performance that is wonderful for all the family.

These are only a small number of the many entertainment options that are available and all are free to be viewed by everyone.  There are also many of the big name attractions available throughout the area including Barry Manilow, Bette Midler, the funny lady of comedy Rita Rudner to mention just a few.

Many of the hotel complexes also have a designated area for children’s attractions which, taking the time to look from the eyes of a child, appear to be every child’s dream entertainment.

As we said on arrival into Las Vegas, trips to the Grand Canyon areas and the Hoover Dam were also on the agenda for members of the group.  Most have now enjoyed these special days.  The more recently constructed glass walk at the West rim – some 4000ft above the canyon – was of particular mention as it was said that the first two or three steps were taken with some trepidation but from there on ‘wow’.  Helicopter rides were also very high on the list of highlights for several of the group where they were taken over the canyon and down on to the Colorado River.  Here boat cruises were also enjoyed.  Then came Hoover Dam, considered an amazing facility to see and drive over.  The new 4 lane highway being built over the dam was something that all agreed will be a marvel in the future.

In Las Vegas the effects of the Californian fires is certainly evident with haze and ash visible around the City.  Our thoughts are will all those involved.

A decision was made for the tractors to remain in Las Vegas waiting for the RV group to rejoin us ready for the last leg of our amazing journey into Los Angeles.  Whilst waiting, meetings have been held planning our final route to the west coast as well as preparation for winding up this once in a lifetime (we think!!) trip.

As we have waited, we have continued to enjoy the many sights and sounds on offer plus some wonderful meals as well (the choices are endless!!).  Some folk have also enjoyed additional excursions out of the City.  Lighting is something this City excels at,  special mention should be made of the presentation nightly in Downtown Las Vegas; it is quite spectacular and having visited twice, we have noted that it is not the same each time.  The current theme in the area is ‘Summer of 69’ so the music presented covers that era.  A visit to the Coca Cola store was of interest to some as well.  Everything you could possibly ever imagine is on sale here all depicting the ‘Coca Cola’ logo!

The weather continues to be around 100 degrees+ (F) but generally the feeling is that we have adjusted over the days and it certainly is not as hard to take as it was during our first couple of days here.  Most days we have still been able to see the effects of the Californian fires but thankfully the fire fighters now seem to be getting them under control from reports we are hearing.

As we have moved around Las Vegas we have been aware of many very large building projects under way but not visibly in progress at present.  On enquiring the comment is that they are in limbo due to the current world financial situation.

After six nights here the tractors will be departing the Circus Circus RV Park at 5.30am tomorrow 4th September, 2009 (beating the heat and the traffic!) heading south on route 95 towards Los Angeles.  The RV group have decided to follow in a day or two.

Since leaving Las Vegas in our 9g’s we have continued to experience heat but, not being deterred, we have all enjoyed the vastness of deserts, the hospitality of people, and the well preserved heritage of the USA.  From drinking Starbucks coffee in Palm Springs to viewing the world’s largest water bombing aircraft at Lake Elsinore, we spent the days climbing through some magnificent ranges at up to altitude of 6000ft.  We experienced yet more wonderful scenery plus the unfortunate evidence of the recent fires.  As we entered Orange County/Los Angeles area it was great to see row after row of Australian Eucalypts and other Australian flora. All of this, as well as the ongoing pleasure of the company of a special group of people – the Tractor Trekkers – gives each of us memories that will remain always.

We thank the locals in various towns/cities who have again welcomed us so openly during this final leg of our journey – to the instigators and volunteers at Goff’s Schoolhouse Museum, what a wonderful thing you are doing to preserve the past and present it to the public, we all thoroughly enjoyed our visit with you.  To Alexa at The Palm Restaurant and Bar on Amboy Road – an oasis in the desert!!  Our time spent with you was most enjoyable and we were only sorry that we were not able to stay longer.  We all wish you well in the future Alexa.  Eric and Melissa at Twenty Nine Palms again we can only say ‘thank you’, your contribution to the pleasure of our stay in your City was amazing.  Through your high ranking contact (Lieutenant Colonel Brent) you gave us the special privilege of the tour of the largest Marine Training Base in the USA with some 10,000 armed forces and several thousand civilian workers on base. We are well aware that this particular excursion would not have been possible without your contribution. You both made us all feel so welcome and we will retain fond memories of our time together.  We also thank you for your advice on the remainder of our route west – it all went very well for us.  To Raynelle at Plaza El Toro your enthusiasm and interest was great to see.  Maybe if you ever decide to change from Security, Public Relations should be your direction, Channel 7 Eyewitness met us in Huntington and we hope that you were able to catch the news bulletin that they put to air last night – what a great finish to our journey.  A bonus to this was the numerous messages received from home from folk who saw us on the news on both Channel 7 and 9 over there.

We thank those who continue to welcome us as we simply pass through your communities.  To David and your little fellow, sorry we did not actually get to meet you in Palm Springs but it was great receiving your email, you never know maybe in the next day or two our paths may cross as we are in and around Huntington.  We have all enjoyed seeing the pleasure on faces as our Orange Tractors pass by – after all they are, of course, the integral part of Transworld Tractor Treks USA 2009, without the tractors this adventure would not have been.  They wholly represent what Transworld Tractor Treks is all about.  As the owner group of the tractors we would like to acknowledge our base club back in Australia – The Chamberlain 9g Tractor Club – who originally brought us together through our many adventures in our home country.  We are so proud and happy that we made the decision two years ago to bring our tractors to the USA.  The American people have certainly embraced our decision and that has topped it off for all of us.

Transworld Tractor Trek’s “TRACTORS ACROSS AMERICA 2009” came to an end at Huntington, south of Los Angeles.  We arrived on the shores of the Pacific Ocean at approximately 10am and the pride we felt as a group is something that will always be so special to each of us. To try to individually mention the names of all who have contributed across the country would be something beyond any of us because there have been so many very special folk. Please, accept our most sincere thanks and gratitude and between us we hope that over the time ahead we may be able to make contact personally.  At this point we extend an invitation to any of those friendly folk who have welcomed us during our journey ‘that should you head to our shores please let us extend the same hospitality to you’. 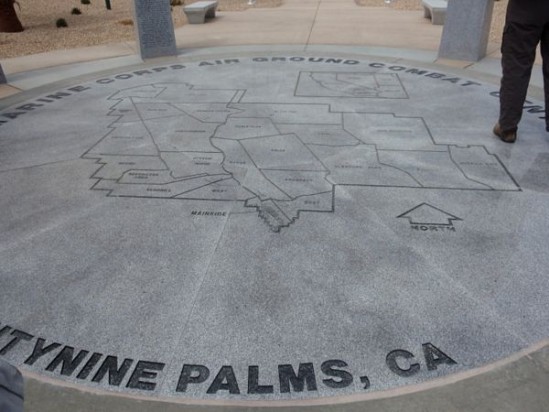 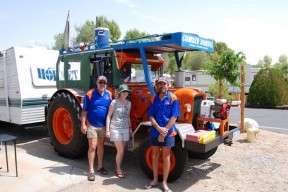 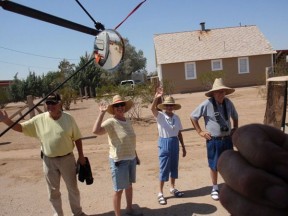 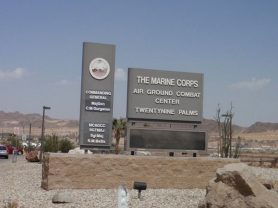 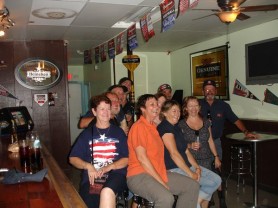 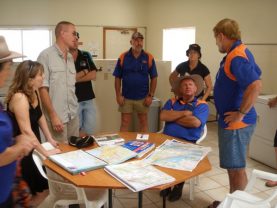 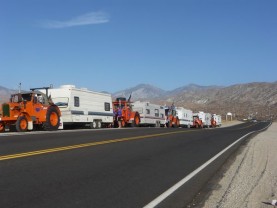 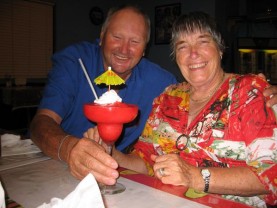 Dick and Barbara with an M drink 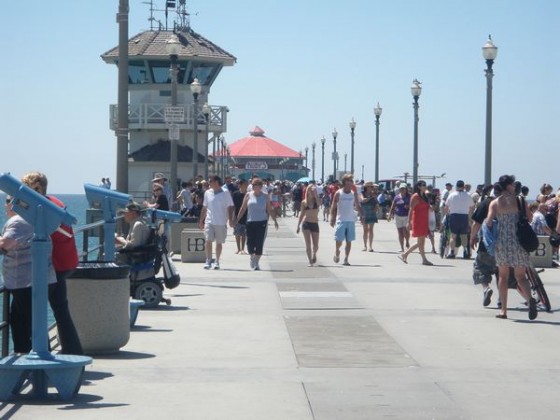