Four of the men made the short trip to Sturgis last night to see what all those bikers get up to.  Upon arrival, their taxi was pelted with golf ball size hail stones which kept them pinned in the vehicle for half an hour.  Once the storm had passed they evidently had a ball – most of the offered photos where unprintable on our reputable website!

The decision was made that the best way to see the Black Hills of Dakota was by tourist coach and this proved to be a very wise choice.  The hills are steep and the roads quite narrow and as we found, to our dismay, somewhat dangerous.

The day started out wet after showers most of the night, but the promise of clearing skies gave us hope for good sight-seeing.  Indeed, by the time the pancake breakfast at the Fort Hays Dances with Wolves film set was over, the skies were blue again.

First stop was at the famous Mount Rushmore where the four Presidents heads are depicted in carvings on the mountain – a really impressive sight.  The sculpture took shape between 1927 and 1941 under the guidance of artist Gutzon Borglum, but was not formally dedicated until 1991.

Then it was down and around on the Iron Mountain Road, the Peter Norbeck Scenic Byway, a real feat of engineering.  Not just hairpin bends, but pigtail bends as well.  Massive rocks are part of these mountains, and four tunnels have been cut through as part of the road building.  Three of these tunnels give glimpses back to Mt Rushmore, evidently deliberately placed so by the engineer, Peter Norbeck.

We were hoping to see some of the local wildlife, but the only ones to make an appearance were a group of donkeys, so tame that they are obviously well used to tourists coming and offering them ‘treats’. Then, after a very substantial lunch at the State Game Lodge in Custer State Park, it was time to move on.

By this time the weather had deteriorated again with not just rain, but quite heavy falls of hail, almost resembling snow where it gathered along the roads.  This made the already dangerous bends very slippery and our driver was taking extra care as he edged his way around the Totem Pole Rock which rose up steeply from the road.  Suddenly there was an awful crunch and to the horror of the passengers, a motor cyclist was seen sliding into the rocks, having skidded on the bend and hitting the bus.  A second cyclist slid his bike across to the other side of the road and there were fears that both may have been badly hurt.  Fortunately this was not the case and although they were removed by ambulance, they were both able to walk.

A rather more subdued group of passengers continued the tour, again through very beautiful rocky outcrops and by the time the next stop at the very beautiful Sylvan Lake came around, it was again fine.  Two of the tunnels would have made for scary driving before the accident, but having only 4 inches of free space made for a breath-holding experience.  The drivers are obviously very carefully selected for their exceptional skills under these circumstances.

Last on the agenda was a visit to the Crazy Horse Mountain and Memorial.  This will be even larger than the Mt Rushmore carvings and stirs the imagination.  Many years or work on this site leave much more to be achieved before this mountain sculpture  resembles the models produced by the artist Korczak Ziolkowski.

To complete the tour, a dinner and Western Music Variety Show gave everyone a happy end to a long but very enjoyable day.  Guests were treated to the sight of three big orange tractors parked outside the main entrance! 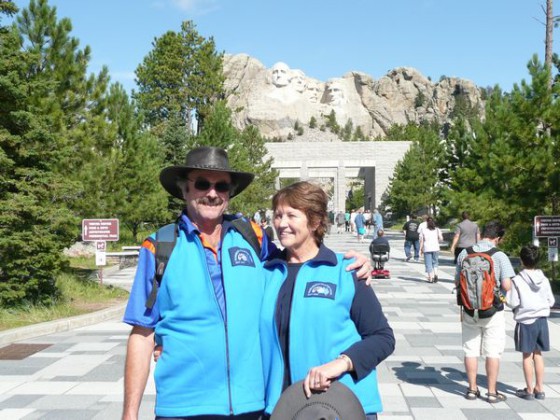 Allan and Carolyn at Mt Rushmore 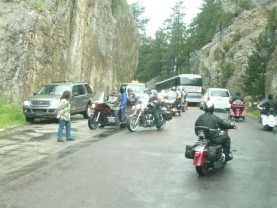 Confusion at the accident scene 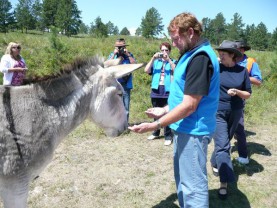 George offers treats to a donkey 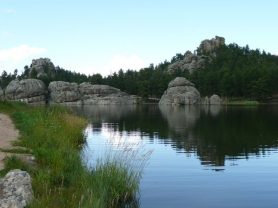 Lake Sylvan in the Black Hills 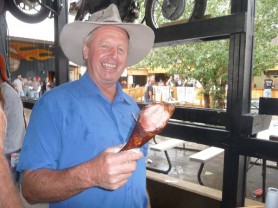 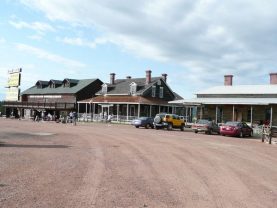 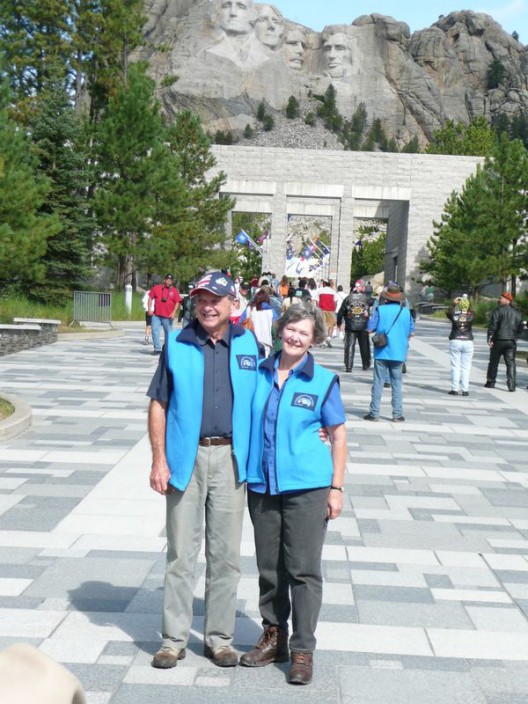 Ron and Kerry at Mt Rushmore 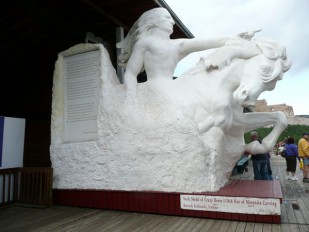 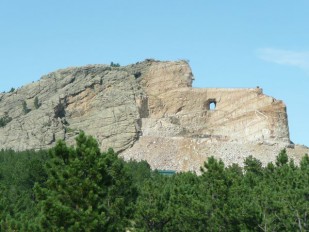 The Crazy Horse work in progress 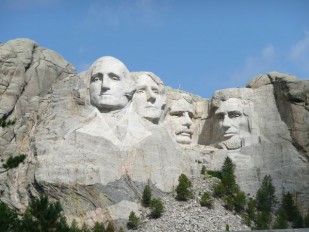