First stop was at Paduca to visit a Quilt Museum, but our early morning getaway was halted when it was discovered that the Museum did not open until 10.00am.  Time is never wasted however – George had a flat tyre which needed repair, and Carolyn needed to type the web notes from their trip to Memphis, so the hour was well spent.  Others wandered around the town or enjoyed the Ohio River which ran behind the Museum’s large buildings.  Once entry was gained, the Museum was quite amazing, housing quilts dating back to the 1800’s and showing every ‘Quilt of the Year’ for many past years – all very worthy winners.  Some of the exhibits, while looking exacting like their sewn counterparts, were actually made from wood – quite inventive and very attractive.

Today was the day when everyone was to rely on their GPS for instructions on how to get to the designated spot – no more concerns about whether we were on the wrong road, no more frayed nerves!  Famous last words – by the time we had all left the city of Paduca, not one vehicle was on track.  Allan’s RV and the tractors headed up Route 45 instead of down Route 60 and Ron & Kerry in their RV found themselves in Metropolis in no time flat which was not on the itinerary either!  Never fear ‘Mary’ would find the way – and find it she did for us, via dirt roads not even in the map book!  Meanwhile the tractors did a scenic tour of a town called Viena and were led back to the chosen path by Curt, a helpful local.

A highlight of the day was traveling over the almost new bridge spanning the Mississippi River at Cape Girardeau, the Bill E Emerson Memorial Bridge, named for a past Congressman.  Not far out of the Cape, we were met by Bob Schmidt and guided to Altenburg, arriving by 3.30pm. Several people assembled to greet us, including Bob Schmidt who has offered to be our host for the overnight stay.  We were made very welcome by Carla Jordan, Director at the Lutheran Heritage Centre and Museum and offered accommodation at the Fairgrounds, a very pleasant, shady area with good facilities.  Then, once everyone had arrived by 6.00pm, we were advised that dinner was to be provided at the local ‘Mississippi Mud’ Tavern and that breakfast was organized at Dib Deli for 8.00am Tuesday morning.  These wonderful Americans never cease to amaze us with their friendliness and generosity.  The meal at the “Mississippi Mud’ was really enjoyable and we were able to chat with Bob and his wife Diane.

The breakfast at Dib Deli was very much enjoyed and again we met interested locals who wished us well. Then it was only a short walk to the Lutheran Heritage Center and Museum where Bob Schmidt gave an enlightening talk about the area’s history which began in the USA when immigrants left Saxon, Germany in 1838 and some settled around what is now known as Perry County.  Bob is President of the Perry County Lutheran Historical Society and is a proud 5th generation of the Schmidt family in America.

The Museum contains a wealth of wonderful exhibits, from original wedding dresses from yesteryear to an old ice-cream maker, found recently in a Church attic.  Next Bob showed the group through their very beautiful Church which has some truly inspiring old Communion ware brought from Germany – a gold and white gold Chalice dates back to 1707 when it was a gift to a Polish Princess.  It was in use until 1967 when because of its value it was replaced for normal use.  Other items date back to 1839.  The Church lost its spire in May when very high winds ripped through the area, however it is surprisingly still in one piece and work is due to commence very soon on repairs and replacement on the roof.  Church Park, opposite the Church, is a lovely area with a pathway leading to two very historic buildings.  The ‘Log Cabin Concordia Seminary’ was moved about ¼ mile to this site in 1911 by a team of horses and given what repairs were needed after arrival.  The other is ‘Saxon Bog House’ a 1800’s home which has been donated to the Historical Society.  Both buildings are now protected for future generations by covering roofs.  The government was approached to help with the first roof – they sent no money, just a set of plans!

After lunch, Bob guided our tractors (minus the campers) on a couple of interesting stops – firstly his farm to show the boys some of his wonderful old tractors, including Fordsons built in 1919 and 1925 and an old Lincoln.  Then it was off to see the Grand Tower Pipeline Bridge at Wittenberg which carries natural gas from Chicago to Texas.  This bridge over the turbulent waters of the Mississippi is the second longest of its type in the US.  Close by is Tower Rock, an imposing rock in the middle of the River – another great photo opportunity.  By the time we returned to the fairgrounds, it was mid-afternoon and time for our next host, Vernon Bruckerhoff, to take the reins.  He guided us to the Henman Winery, the proprietors of which kindly offered to open specially for us so we could sample their extensive range of German wines (which we did), then on to a Al’s Place in McBride MO for a great chicken dinner, before driving to his farm to stay. 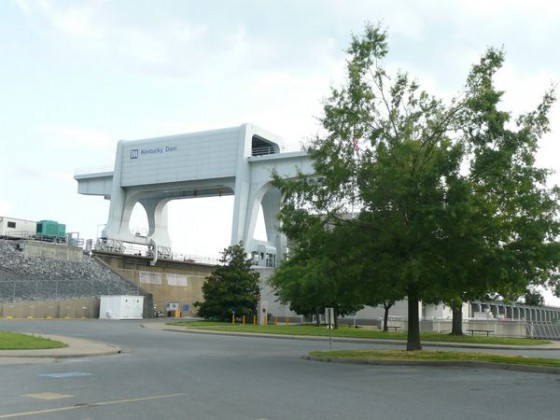 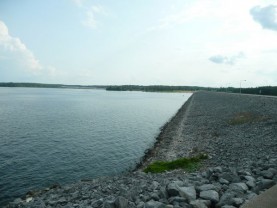 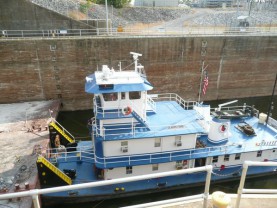 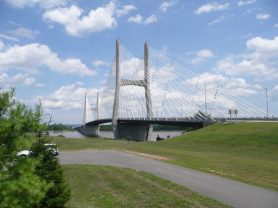 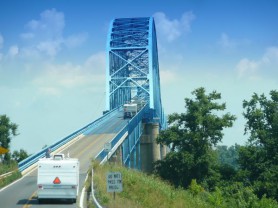 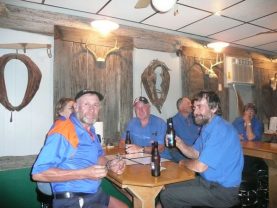 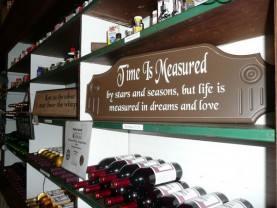 A saying worth remembering at Hemman Winery 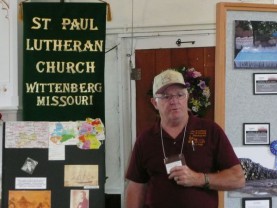 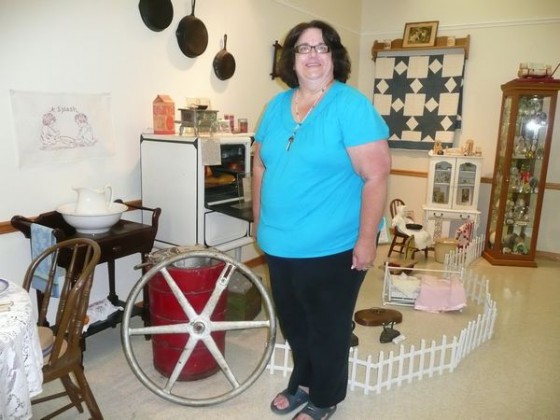 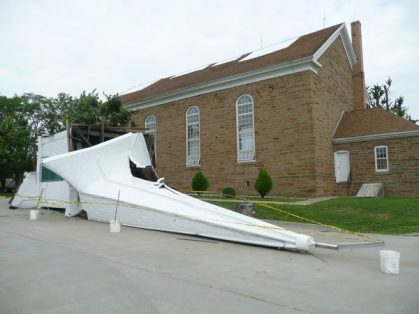 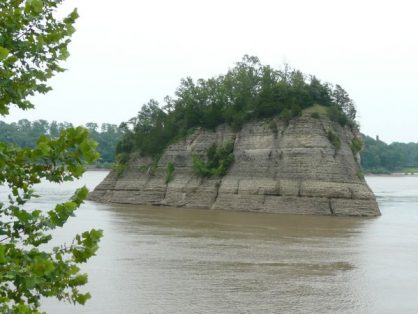