Breakfast was served on the patio at 6.30 by Margaret and her happy band of helpers – a wonderful array of cooked foods followed by pancakes, strawberries and maple syrup. This was a great start to a great day. We needed to be on the road by 7.15am to make the relatively short trip to Archbold. This was a lovely run on quiet roads through wheat, corn and soy bean crops. Bill Swope (Margaret’s son-in-law) guided us from Perrysburg to Pettisville where Carlos joined us and guided us to his home at Stryker, near Archbold.

Arrival time was 9.15, which gave us just half an hour to be looking our best before heading to Kunkle for the 4th July Parade in which we had been invited to participate. This was a treat we had not been aware off, so it was with great excitement that the four operative tractors, Carlos’ wagon and our good friend Ed Roth’s vehicle made the journey to the small town of 400-600 residents (dependent on who is telling the story) for what turned out to be a fantastic parade – horses, wagons, trucks, tractors and our small contingent which raised a lot of eyebrows and much interest. A greeting of ‘Good-day mate’ to a small lad was answered with ‘Wot?’ The figure given for the numbers lining the streets was around 3,500, a large percentage of whom were children who were all merrily waving their American flags – we flew our Australian flags with pride, but all the tractors also carried some decoration in the red, white and blue which adorned almost every home and certainly every participant in the parade. Ron decided to video the whole parade so the rest of the party could see what they were missing, and it was only after the vehicles had driven a few miles down the road that it was noticed that he was missing! Some half an hour later he was delivered back to us on a quad bike! This was indeed a memorable event and one which none of us will forget.

Once back in Archbold, we were guests at lunch at the Sauder Barn and joined by Ed Roth and his friend Merle who entertained us with their music, then most trekkers went to the Sauder Village to have a look around before relaxing around the campsite at Carlos and Raffaela’s property. 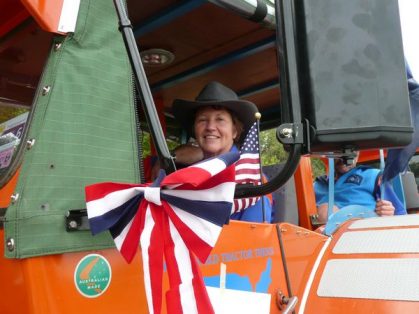 Carolyn is off to the Parade 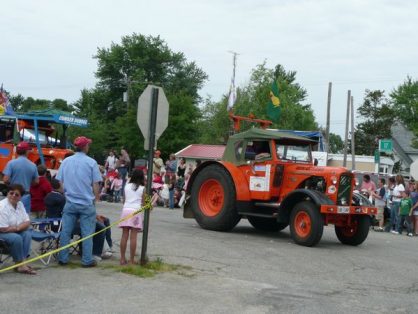 Aussie Tractors in the Parade

When Ron and Kerry last visited Archbold in 2008, they were made very welcome at the Mennonite Church, so it was nice to be invited back again this trip.  A group of six trekkers were driven by Bob Frey and Ed Roth to the Church for an enjoyable service which focused on the peoples of the world, so it was appropriate for our visit.  Several of their members are joining some 3,000 Americans for a World Conference in Paraguay this month.

George and Cumber left at 1.00pm to take Cumber’s nephew Brad to Detroit for his flight back to Phoenix.  Brad had travelled with us for about a week and we really enjoyed his company.

Then it was party time again with a ‘meet and greet’ at Carlos’s place.  The local tyre company, Millar’s Tires, supplied wonderful roast beef and all the locals brought a plate of salads or deserts – enough food for an army, let alone the large crowd who attended.  Ed Roth and his band of musicians again entertained, along with other talented groups.  An effort by our members to represent Australia was well received but the fact that two song sheets carried different versions of ‘Waltzing Matilda’ made for a rather garbled result!  Dick and Allan entertained with a demonstration of sheep shearing while we sang ‘Click go the Shears’ and we rounded off with ‘Advance Australia Fair’.  Good fun but would not win any prizes!  All round a really good day, and our thanks to Carlos and Raffaela for their efforts in oganizing this event. 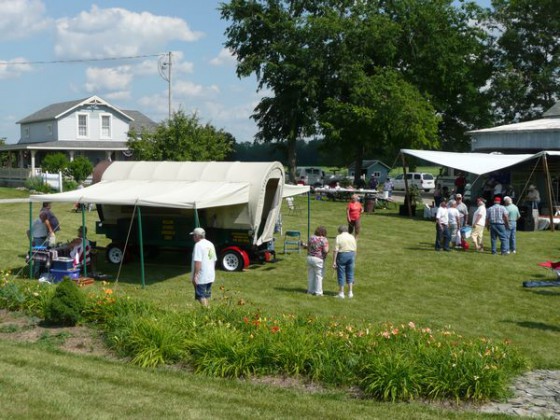 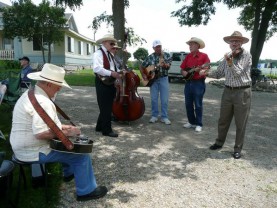 Ed Roth and his merry musicians 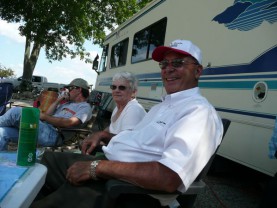 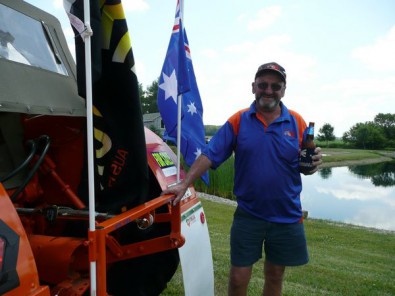 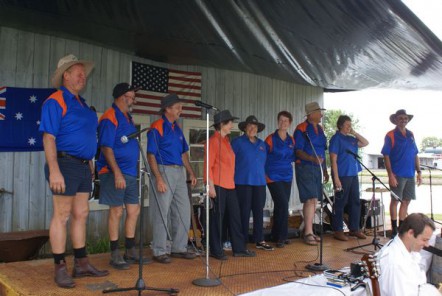 All the members of our group had been looking forward to visiting the Ford Museum at Dearborn but the distance was too great to take the tractors. We were therefore very grateful when Bev Miller (of Miller’s Tires) arranged for three locals to drive us in their vehicles to the Museum near Detroit in Michigan. So at 7.30am the convoy of three vehicles and some 18 people made the two hour trip to Dearborn. What a fantastic place this is – one would need a week to do it justice. The Greenfield Village alone would take a day to see properly – everything from a working farm of the 1860’s, to a village of eight workshops featuring glass blowers, tinsmiths, printers, potters etc, to a steam train trip around the extremity of the extensive property. Then there were the shops – authentic reproductions of the milliner, candy store etc. A whole section of the Village has recreations of different homes of the various periods and features Thomas Edison’s homestead. Along the streets meandered couples in period costume, always willing to stop and have a chat about the period of time they represent, and for a small fee, one could take a ride in a T Model Ford, or a horse-drawn or old fashioned omnibus. The 96 year old carousel was very popular with the younger visitors.

Next it was time to go to the separate Ford Museum – an enormous building extending over 12 acres. This building houses every conceivable motor car, from the Kennedy Presidential Limousine to the smallest vehicle, a Quadricycle. There is the ‘Goldenrod’ which was clocked at an average of 409mph, favourite cars of the stars, various planes from man’s earliest attempts to master the skies, and the biggest exhibit of them all, the Allegheny Locomotive built in 1941, one of the largest steam locomotives ever produced. Then there are the tractors – every size and shape and the farm and steam powered machinery. Apart from the vehicles and machines, there are displays of silver and pewter ware from the 18th century onwards, furniture, house designs, clockwork, jewellery – the list goes on and on. The feet run out of steam before the opportunities and here again one needs more time – many days in fact.

It was a weary band of travelers who returned to Archbold around 7.00pm. 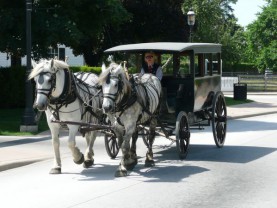 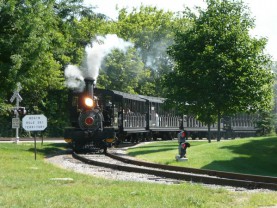 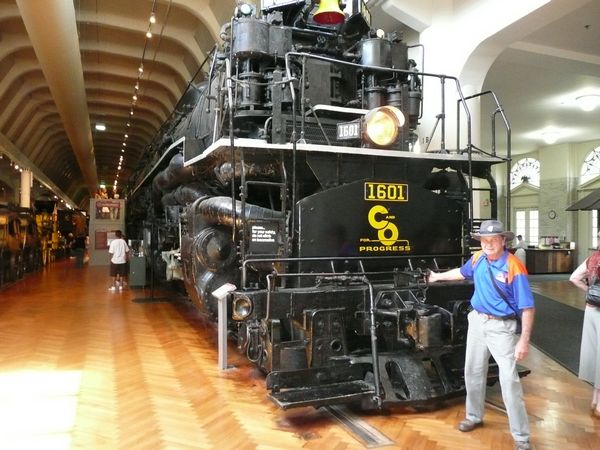 The Allegheny Locomotive at Ford Museum

The day was again clear and sunny which gave good conditions for the press photo shoot before we left Carlos and Raffaela’s property with our thanks for their hospitality.

lan and Carolyn made a direct trip to Ford Wayne for a specialist check up for her eye problem and the rest of the group made a leisurely trip via Hicksville and over the border into Indiana. Here for the first time we noticed evidence of lower rainfall over the last couple of weeks. The tomatoes, corn and soy plantations were looking a little stressed and the grass was browning off. This seemed to be fairly isolated however, and down the track the corn was bigger and greener than ever.

The short trip to Fort Wayne was accomplished in time for lunch and most of the afternoon was taken up with shopping and general chores, and giving interviews to press and TV. Ron was given the job of filming the presenter in the tractor with Cumber – he does not know how those cameramen (and woman in this case) hold those heavy cameras for such long periods of time. Unfortunately, the signal under the heavy canopy of lovely green trees at the Johnny Appleseed Campground was not strong enough to pick up the Fox channel, so we have not seen the results of our efforts

We were happy to see Allan and Carolyn back late in the afternoon and Carolyn was relieved to have been given a good report. Then it was a relaxing meal around the BBQ while watching the video of the July 4th Parade. 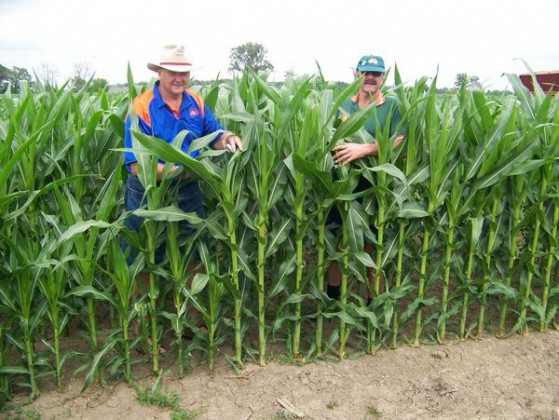 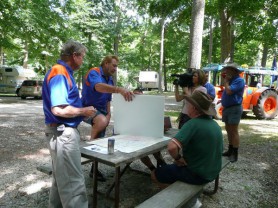 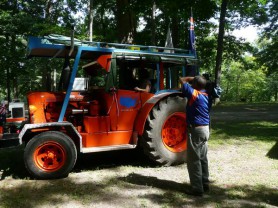 Ron takes over to film the presenter in Cumber’s tractor