We were underway by 7.45 for the long drive to Penfield for the I & I Antique Tractor and Gas Engine Club’s Historic Field Days. The day had started out bright and sunny but became quite overcast late in the morning and light showers became heavier as evening approached.

It was great to catch up with our good friend from our last visit to this area, Darius Harms, who is Vice President of the I & I Antique Machinery club. Darius and his wife Lois came a short way out of town to meet us and bring our contingent into the show-grounds, already filling quickly with all manner of tractors etc.

After a night of heavy rain, we awoke to find the grounds teaming with every conceivable machine and many people making last minute preparations. Our tractors have had a very enthusiastic reception and many people have been around to ask questions about these unusual machines. Once again the press and TV were in attendance and then at 1.00pm it was time for the parade of tractors and this was again a lot of fun. Our Aussie tractors were invited to join the parade which they did with pride. The crowds are quite large but if the rain keeps away, tomorrow should see an even larger crowd. One of the special exhibits at this year’s event is ‘Big Bud’ an absolutely huge tractor shipped in from Montana This machine was built in 1977 and only retired last year and is a truly awesome piece of machinery. In the evening most of the group joined some locals for a few quiet drinks and lots of fun at the Deer Club. Word has it that some trekkers continued on to another local establishment! 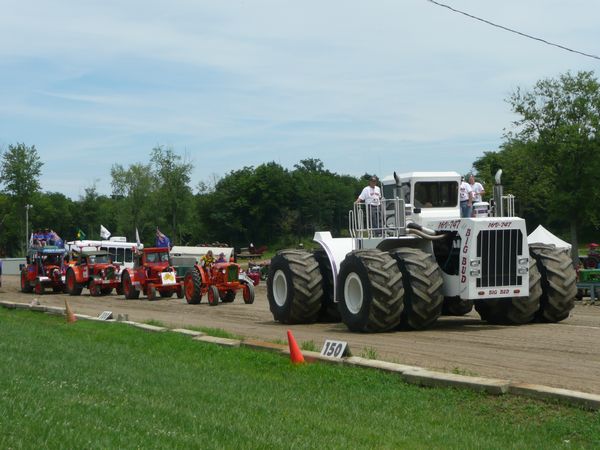 Big Bud’ leads the 9G’s in the Final Parade

The weather started out overcast and looked a bit threatening but did not rain, to the relief of the organizers who do not want the tracks to turn to mud.  The ladies took advantage of the offer by Lois Harms to take them shopping in Rantoul while the men stayed behind and Ron, Peter and Neville chatted to the press.  We have had excellent response from the media everywhere we have gone – word seems to spread like wildfire and here at Penfield there is a large contingent of press.  When the 1.00pm parade started on this second day, Cumber was invited to be lead tractor and there was quite an array of large TV cameras focused on our tractors.  There are quite large spectator stands at the starting area which is also used for activities such as tractor pulls etc.  These stands were packed and when the parade was due to start, the National Anthem was played while everyone stood to attention – it was a very stirring moment.  The Americans are indeed very patriotic people, as well as being extremely friendly and welcoming.  Attendances on this second day of the four day event were high, with a huge number of golf buggies driving around the grounds at any time.  Tractors double as ‘horses’ in pulling sponsored covered people movers so no-one has to walk further than they desire.

This was quite a relaxing day and gave members of the group a chance to check out the many exhibits or take the short trip into Rantoul.  Late in the afternoon, Bill and Patty Swope from Perrysburg visited the Farm Days event and we caught up to share a meal.  Patty’s mum Margaret once again showed her wonderful cooking abilities by sending chocolate chip cookies for each of our group.

Day three of the Field Days started out looking dismal and very soon the rain came down in torrents and everyone found an indoor place to shelter.  By the time it eased up in the early afternoon, the tracks had all well and truly turned to mud and it was mid afternoon before the daily parade could be run.  Once the sun came out, the crowds reappeared in large numbers and the fun continued.

After the daily parade of tractors, the various classes of tractor-pull commenced and ran until dusk, then the Steam Engine Spark Show was held at dusk – the fuel used is evidently sawdust and when lit up it sends up a plume of bright orange flame – a truly spectacular sight against the night sky.  Then it was time for the fireworks, an amazing display and a truly wonderful end to a very full day.

Sunday morning was a bright and sunny and cool one and once again the grounds were thronged with visitors, though not as many as the previous day.  Both the local Churches, both Catholic and Methodist, had services and three of our ladies attended the Gospel Music Service at the Methodist Church where there were several talented musicians in attendance, led by local celebrity Marvin Lee.  None of this group read written music but gave us wonderful renditions of many favorites on instruments including the piano accordion and mouth organ, also a steel guitar, all in all seven musicians and vocalists.

The local who represents ‘Abraham Lincoln’ also well joined in and gave a rendition of ‘Just an Old Rugged Cross’ on a saw – quite amazing!  In real life this gentleman is Mr Gerald Bestrom from Hastings MI.  We hear that he is soon to be entered in an Abraham Lincoln Look-alike Competition.  We cannot see how anyone else could possibly look so authentic in the part.

The last day’s parade was really special as ‘Big Bud’ was primed up and ready to roll as lead vehicle with the Chamberlain’s next in line.  Second up was Sherry Schaefer, Editor of the Heritage Iron Magazine who was driving Darius Harms’ Chamberlain Canelander, a rarity in these parts.  Ron took the passenger seat to get a good vantage point for taking video of the event.

As the afternoon wore on, more and more of the stallholders disappeared and there was a steady stream of vehicles towing tractors moving out of town.  Our group was able to host a small group of people who we have come to know over the past four days and who have all gone out of their way to be helpful.  We were indeed fortunate to have genuine fried chicken from Rube King’s Country Cooking who was a stallholder at this event.  This was an opportunity to say thank you to these helpful people who have made this stopover so enjoyable. 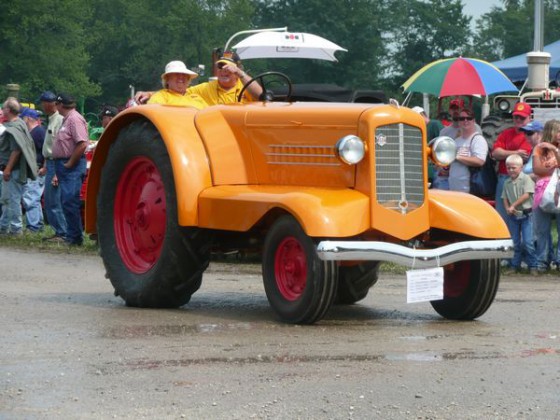 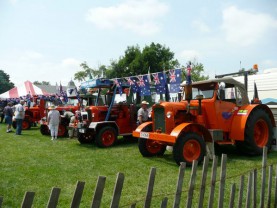 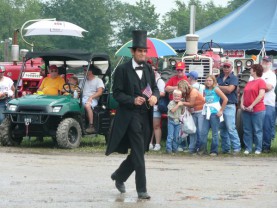 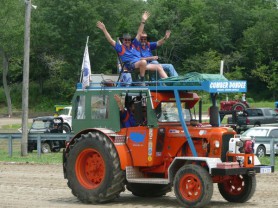 Allan and Peter have the best seats in the house 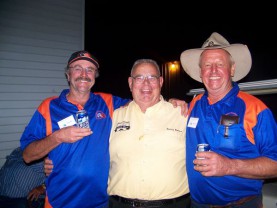 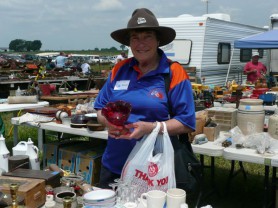 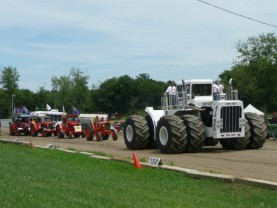 Big Bud’ leads the 9G’s in the Final Parade 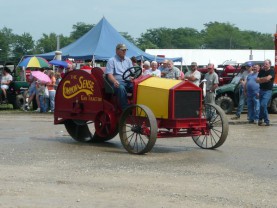 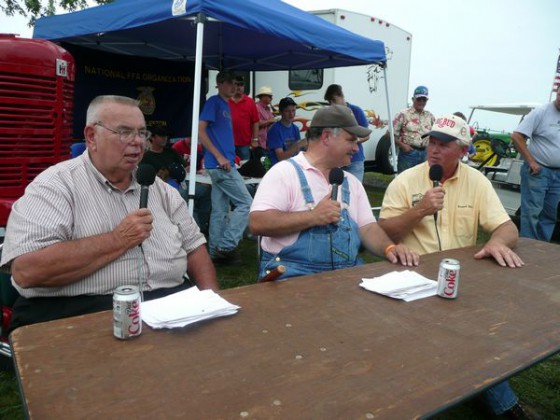 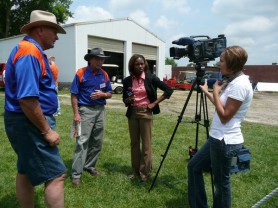 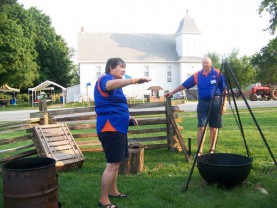 Dick and Barbara check out cooking gear at Penfield 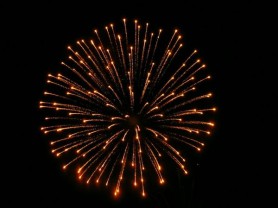 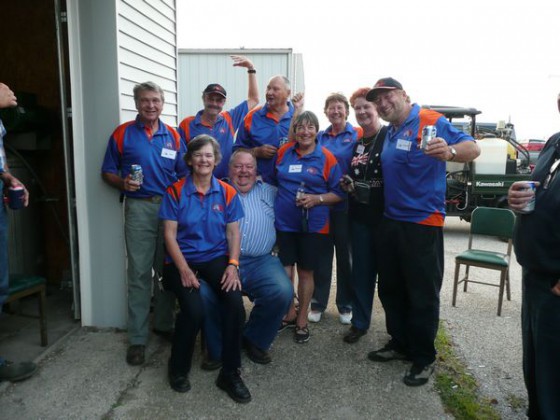 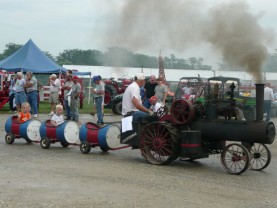 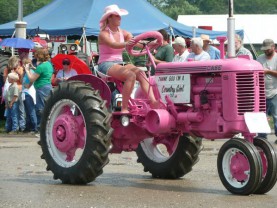 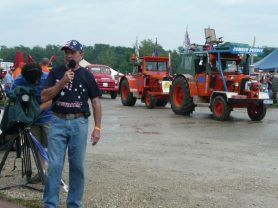 Ron’s message of thanks for support received 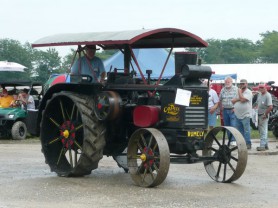 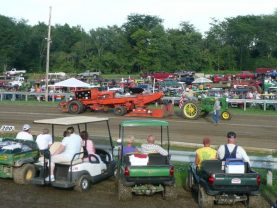