Preparing for the start:

Seven members of the crew arrived in New York mid June and spent the next few days staying in New Jersey while looking around New York, organizing local phones etc before heading to Rhode Island to collect the Bywaters’ RV (motor home).   While there, four other crews chose camper trailers (caravans) to be their homes for the next three months and arranged to have them transported to Arcadia where we were to spend a couple of nights.  Then it was south again, this time in the RV with seven passengers to Westminster where we all stayed at or behind the Boston Inn.  Allan and Carolyn arrived in their RV and next morning Anne and George joined us after flying into Baltimore, so our numbers now stand at 11 with the final three members due early July.   Four team members took the opportunity to travel to Niagara Falls while others stayed in Westminster and almost cleaned out the local shops with setting up their vans.  We relocated to the Maryland Steam Historical Society Inc’s headquarters at the Arcadia Showgrounds where we had arranged to have the camper trailers delivered.  Our four tourers rejoined us there after their very enjoyable trip to Niagara and Gettysburg.  More shopping at the local Wal-Marts and we are starting to look and feel well equipped for the next three months.  Eight of the group spent an enjoyable day in Washington DC, a truly beautiful city with many spectacular memorials and monuments to commemorate their history.  A visit to the Arlington cemetery was a sober reminder of the price of war and the eternal flame of JFK’s resting place made for reflection on his sad premature loss.  Starting out at 5.30am avoided most of the traffic, but the return journey to Arcadia took 2 1/2 hours for the journey of 60 miles (100 kms).

The tractors eventually arrived on June 26th after many delays.  The owners all looked proud and relieved to have their machines arrive in good order.  Many hands were busy with last minute preparations to have everything ready for the start.

While staying in Arcadia, we had the assistance of Ken Warehime, the President of the Maryland Steam Historical Society Inc and he and many of his society members could not do enough to help us and provided any assistance required, from adjustments to the tractors to BBQ plates and flagpoles.  Then as a wonderful surprise on our last evening there, Melinda and her group of helpers hosted us to a fantastic spread in their hall.  These people will always be remembered as good friends during the first often trying days of preparation. 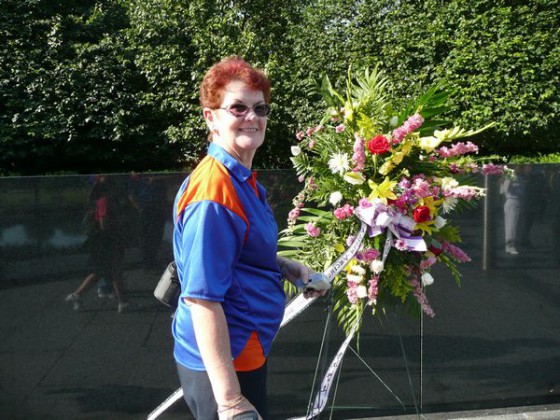 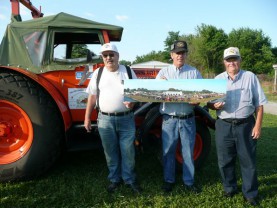 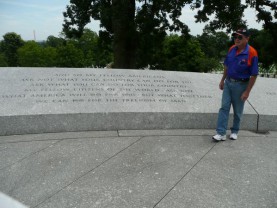