Saturday 3rd and there was great excitement and anticipation in the camp as the “real-life” wedding was to take place for Suzanne Wood and Geoff Faulkes, alias Doris and Boris.
All the tractors were given a good wash and decorated with white wedding ribbons, as they were to form a guard of honour. During the day, among other things, the bride-to-be spent considerable time giving haircuts to many of the male trekkers. This was a very generous and noble act.

The groom was transported to the ceremony by his Best Man, Kim Henderson, in Kim’s tractor ‘Priscilla’, while the bride travelled in Cedar Armstrong’s tractor ‘In Like Flynn’, which had been renamed, ‘In Like Boris’ for the occasion. Geoff DePledge drove the ‘fairy girls’ in his tractor ‘Ruff N’Tuff’’.

Just as the bride and attendants arrived at the scene, a helicopter flew overhead to take aerial photos. Thank you to Hugh (Cumber) Campbell, who arranged this at short notice. The alter was set on the lawn, with the beautiful river and overhanging trees as a backdrop, and potted plants placed to mark out the area.
The wedding celebrant, Teddy Birch, who had travelled from Wyndham, officiated at the ceremony. The Bride’s mother June flew from Perth to be with her daughter, Suzanne for the happy event, and stayed with the group for a week.

Cedar Armstrong gave the bride away, then the bride and groom exchanged vows. Champagne was served on the lawns, as Mr. & Mrs. Faulkes were presented to the wedding party, before speeches and photos. A lovely Smorgasbord was enjoyed outside the El Questro restaurant, around a huge fire.
On the following day, August 4th, on the way out of El Questro Station, many of the trekkers took the opportunity to stop at Zebedee Springs to bathe in the thermal springs. Then it was time to be back on the road again. Another stop along the way was Emma Gorge, which is also operated by El Questro. Emma Gorge is another picturesque and relaxing resort style restaurant and bungalow accommodation.

Some trekkers detoured to have a look at Wyndam, while others continued on to Kununurra and planned to do a day trip from there. Most of the convoy camped at the Show Grounds, while a few others found sites at nearby caravan parks.

Monday 5th, a day in Kununurra and many different tours were taken by the travellers, including river cruises, and scenic flights which flew over the Ord River, Bungle Bungles, Carr Boyd Ranges, Texas Downs station, Lake Argyle, and the Argyle Diamond Mine.

Hugh Campbell was fortunate enough to have a friend with a river boat, and took the Dongara crew for a sunset cruise up the river, and then skippered the boat for a repeat performance the following evening for the 9G South group. Kununurra was the last opportunity for the ‘big shop’ as most of the crew needed to stock up for the following 4 weeks and the Canning Stock Route.

A huge social and fund raising evening was held at the Hotel Kununurra. A special thanks you to the Managers/Licensee of the hotel, as well as the ladies from the Chamber of Commerce who managed to extract donations of merchandise from almost every business in town, or so it seemed.

These items were auctioned by Gary Snook and raised over $4,000 for charity. Even the food for the BBQ was donated. Another fun evening all round, as the karaoke machine was cranked up, and trekkers showed how well they could sing.

Tuesday 7th, a fairly unhurried start to the day, to pack and do last minute shopping before heading out to Lake Argyle which was about 80km to travel. The campsite at Lake Argyle was situated quite close to the dam wall, next to the pub/restaurant. All of the old buildings at Lake Argyle were built for the construction workers when the dam was constructed and were expected to have a life of about 5 years. They are still in constant use, but are looking very tired. There are a few new transportables, which house the offices for the tour operators.
Wednesday 8th and Geoff DePledge and Ivan Siviour were fortunate to have been contacted by Andy Scherell (ex Kendenup) who has a commercial fishing license to fish on Lake Argyle. They left with Andy around 4am to go out on the boat and watch the net fishing.

A tour of the pumping station and hydro electricity station was held during the morning. Later in the afternoon many of the trekkers took Lake Cruises which ran for either 3 or 5 hours, and visited the many islands to observe the wildlife. Some of the sightings included Short Eared rock wallabies, euros, bustards, crocodiles, ducks, egrets and many, many other bird species.

Drinks and nibblies were enjoyed on the cruises as they stopped for a while to view the sunset across the water.

Friday 9th August, we packed up, said our goodbyes and headed along down the road again. Gilly Ollerenshaw and Suzanne Faulk’s mother left the trek from Lake Argyle. Grace and Ian Steinert were there to wave us off.

Turned tracks up toward the Northern Territory and eventually reached the border, at the Timbercreek and Katherine signs. We turned south along the Duncan Highway – at one point; Lake Argyle was only about 18km from the road.

The scenery was more varied than the Gibb River Road – more shady trees etc. The road was a little rough in patches, but really quite reasonable.
Ivan Siviour, and the Snooks tried their hand at fishing at the little river where we pulled up for lunch. Ron and Jean Baird pulled in 3 big bream in a very short time, but no one else was successful. A few of the crew had a swim. The river was cool, clear and deep.

That evening the trekkers pulled into Spring Creek Station homestead and camped on the lawn. There was very good water available for us to use.
The station managers were known to Hugh Campbell (president) and Peter Nunn (vice-president). As usual Hugh was a delight to watch as he inspected the machinery sheds. He was able to get some of the old motors working in extra quick time for the station people, who were amazed and grateful. 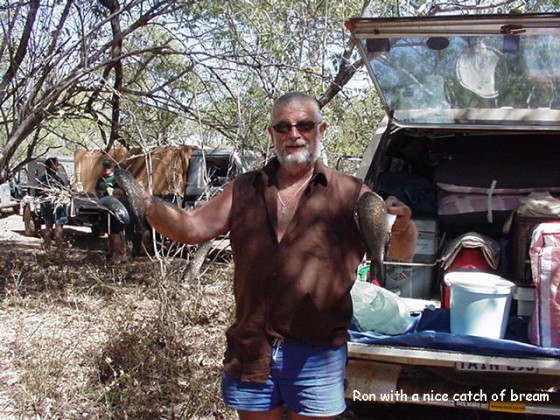 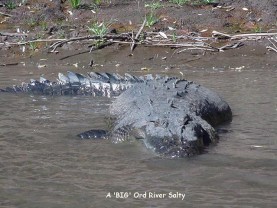 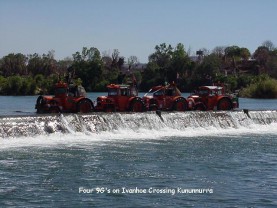 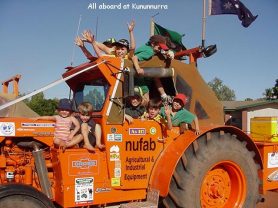 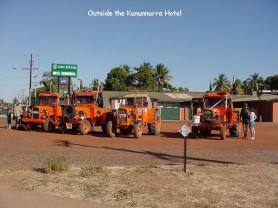 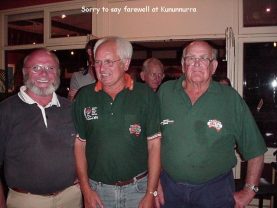 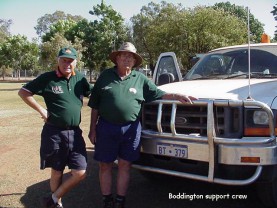 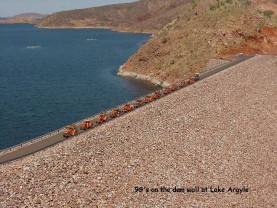 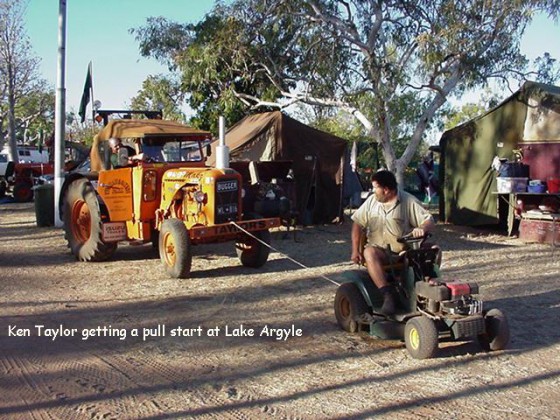 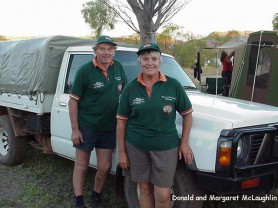 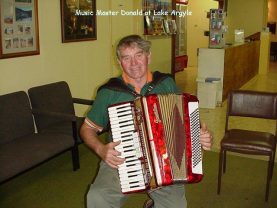 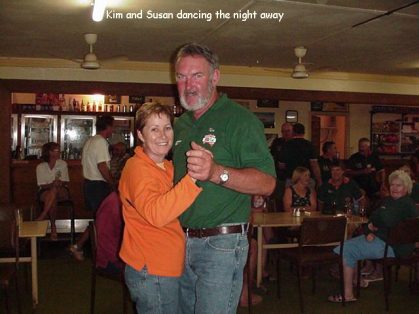 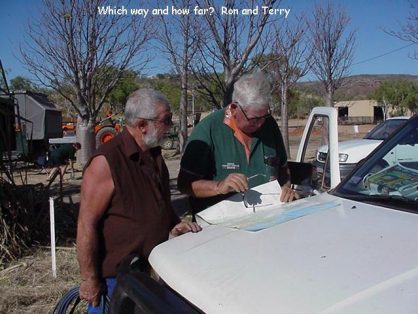