Sunday 7th July was the official starting day for the ‘2002 Tractors in the Outback’ tour. For the teams from Esperance and Albany however, their journey began sooner. These teams were already on the road a week earlier because they first had to travel up to Dongara and join the Midwest team.

Pre trek ‘activity’ was already happening 3 days before the start. On Thursday 4th, the Dongara crew arrived at the Greenough River around eight o’clock and set up camp with the 9G South group (formerly known as the “Albany mob”). An evening of hilarity prevailed as an initiation ceremony was held to initiate the new trekkers. Promises were made, belly buttons displayed and the sign of initiation was placed on the initiate’s forehead. During the night a big gust of wind arrived, bringing with it some rain, ominous beginnings.

Friday 5th and the two groups set out for the Murchison settlement. At morning teatime, Peter Nunn had a mishap when the lid on his toolbox came crashing down on his head. He received a severe cut on his skull. Luckily the registered nurse was in the vehicle behind, and came immediately to his assistance. He was cleansed, shaved, treated and bandaged by the nurse and the club fairy came with her magic wand and gave a super strength zap for speedy healing. The group lunched at the Murchison River, and finally arrived at the Murchison settlement at 3pm.

Most of the other trekkers had already arrived and settled into their campsites. The Esperance crew however was still in transit and arrived a few hours later. The contingent was now complete. The community at Murchison Settlement put on an evening meal and attended the bar at their Sports Club. An auction was held by the club to raise money for charity.

Sunday,7th July, the official starting day and everyone was greeted by a noisy “feral” Chamberlain 9G which had been trucked in to show the trekkers what a “real 9G” should look like. The ‘feral’ was flying the Chamberlain flag which the driver had paid $100 for at the auction the night before.

The tractors all lined up for a grand photo shoot (with the ‘feral’) in preparation for the official beginning of the trek. The Shire President, Simon Broad and CEO, Neil Warne of the Murchison Shire gave speeches and then the trek received a blessing from the outback travelling Presbyterian minister, David Hart and his wife Doreen. Life member, Ron Bywaters, flagged the tractors off in grand style with a bottle of champagne; each tractor receiving a small portion of the ‘bubbly’.

As the convoy travelled along the road, an unexpected surprise appeared by way of a roadside fire and table. Station Owners of Curbur Station and Mt Narryer Station had arrived with homemade scones, and were making billy tea on their fire, which was provided to the trekkers for a late morning tea. Country hospitality at its best.

That evening, camp was set up at the Wooramel River. A visit was made to Billung pool which was a beautiful big billabong with tall gum trees. Many lamented the fact that the campsite should have been there, the previous night.

On the road again, and it was a fairly full day trekking until arriving at the Landor Race track. The Landor Race track was an amazing scene. There were large pavilions, beer huts everywhere, stables, toilets and showers, and private shelter-cum-entertainment areas which would have been erected by all the different stations.

The next morning, Tuesday, 9th, it was time to pull up camp and head north again. After morning-tea the group stopped at the Jilgoo store and Burringarra aboriginal community. As the school holidays “were on” there were lots of young aboriginal kiddies who were excited about the tractors and climbed all over them to have their photos taken. Later in the day the group arrived at Mt Augustus Caravan Park. Mt Augustus is the largest rock in the world.

A quiz night was held in the evening which was preceded with music on the keyboard by Fiona Nunn and Susan Henderson. The quiz was organised by Vicki and Patsy Smith and included many questions about the Chamberlain 9G and some of the earlier model of other types of tractor. There were also games and competitions during the evening which provided lots of fun and laughter. Fiona Nunn (age 13) recited her ‘ballad’ which she wrote about her experience with the dunnies at the Landor race track.

Wednesday 10th was a rest day, but was mostly spent either climbing the rock, walking trails or exploring other areas. Some aboriginals at the caravan park were wearing gold nuggets around their necks and allowed the trekkers to hold and examine them.

The next day was a photo session opportunity with all the tractors lined up in front of Mt Augustus. After the photos, it was off again up north through the station country and set up a bush camp at Mt Vernon station. Driving along the dusty road and the group noticed it was being checked out by a light aircraft. It was the station owner from further back along the track, and he landed alongside the road so some of the trekkers stopped and chatted and caught up with some news.

Jeanette Siviour made 5 loaves of bread in the camp oven over the coals of the camp fire. Yum-yum. When Jeanette makes her lovely fresh bread, everyone wants to be her best friend, in the hope of being given some bread.

Friday 12th, was a lovely day on the road with many sightings of birds and kangaroos, including what looked like an albino joey. Whilst driving through Ashburton Downs Station an authentic message left for Cedar Armstrong on the boundary fence was spotted. It was a large woven polyester sack which had been written on with felt pen and tied to the fence. Cedar’s next door neighbours had heard about the trek on the radio and knew he was in the area. They said they camped for 5 days waiting for him to arrive, and left the note for all to see.

That night the group camped at Rocklea station which is owned by Hamersley Iron, the mining company. The station manager Rob, and his wife Amanda and two small children called in to visit and look at the tractors.

Now Saturday 13th, and it was off to an early start to get in to Tom Price to find the shops and stock up on stores. Most of the club set up camp at Thompson Oval, although a few trekkers made their way to the caravan park.

Next day, the group set out for the Karijini National Park which is about 50 km from Tom Price. The ranger found the group a camping area close to Dale’s Gorge which was another 45 km into the park. 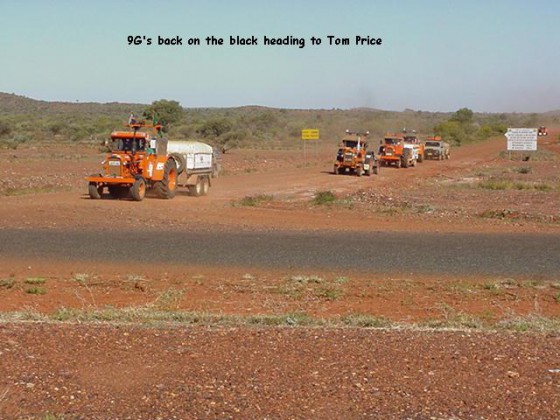 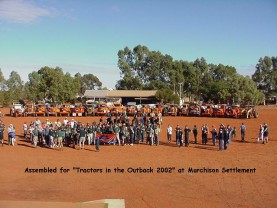 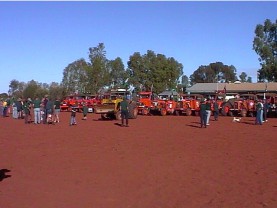 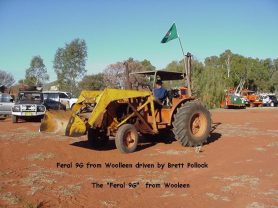 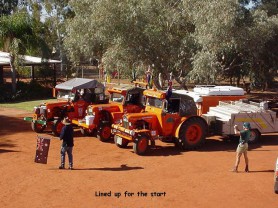 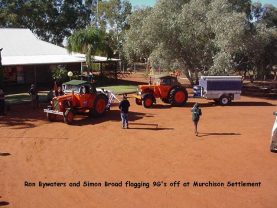 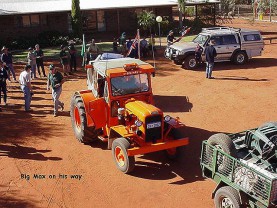 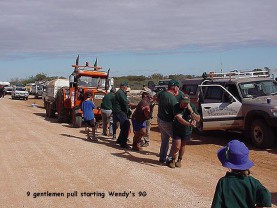 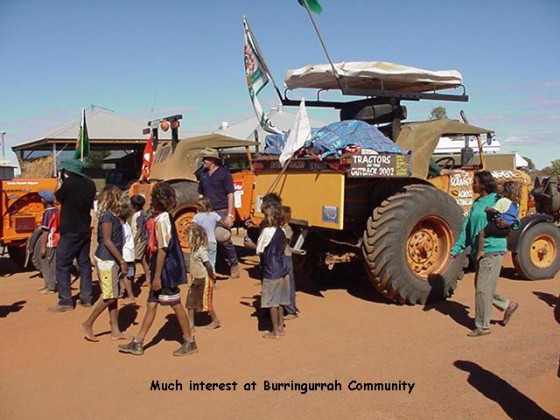 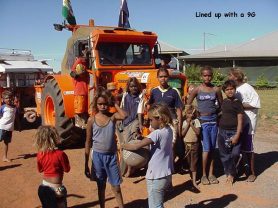 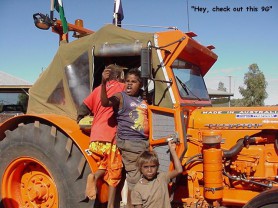 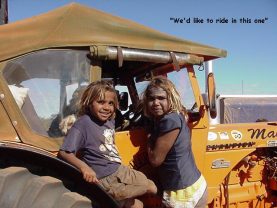 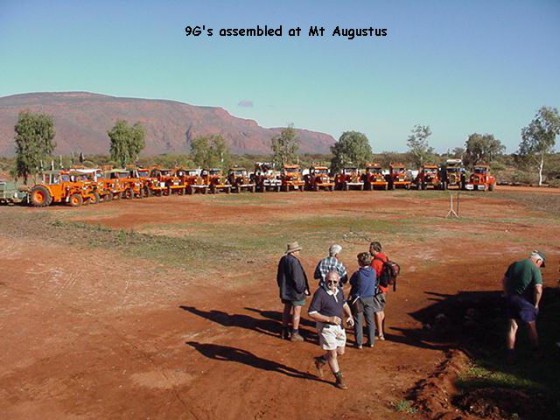 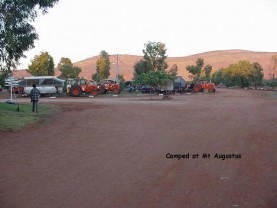 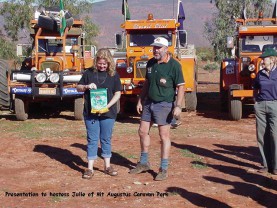 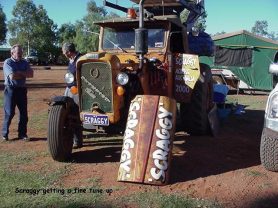 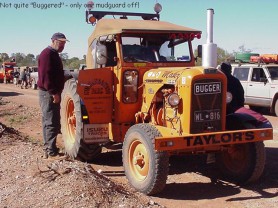 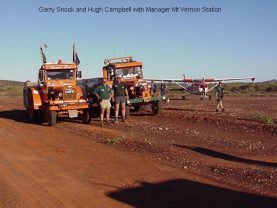 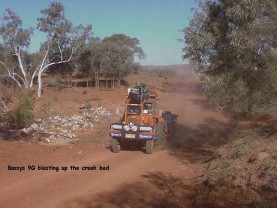 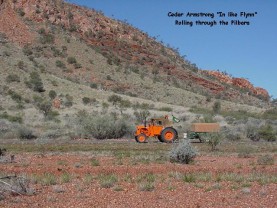 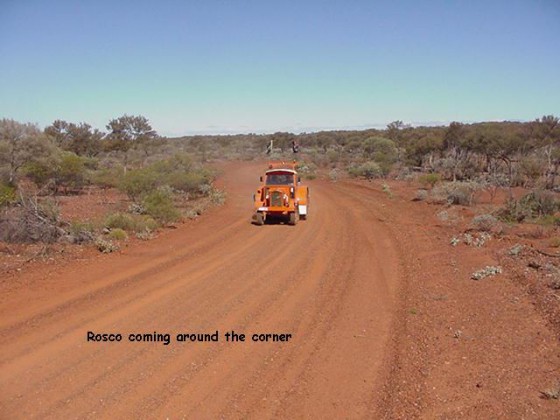 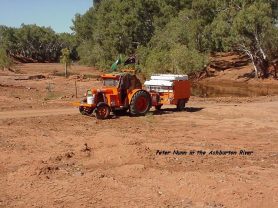 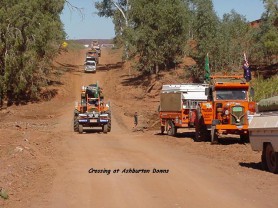 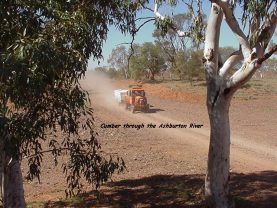 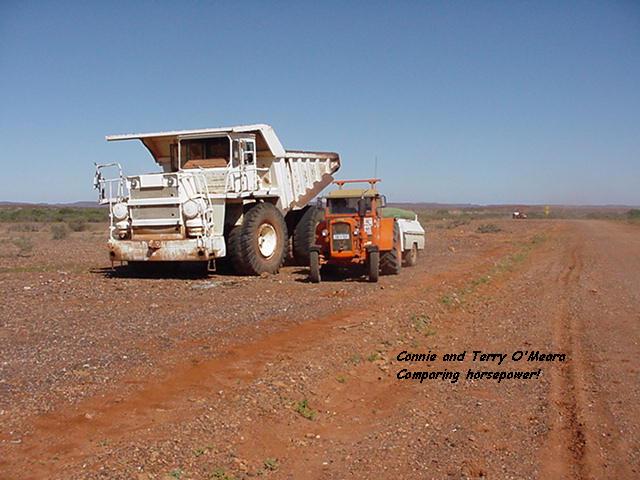