Saturday, 10th we left Spring Creek Station for Nicholson Station campsite. Stopped for morning tea under the shade of a tree.

The ‘Esperance Hendersons’ had two flat tyres so it wasn’t a very good day for them. We went through two of Janet Holmes A’Court’s stations of which Nicholson Station was one – it was a big day. The designated campsite was nowhere to be seen so each group eventually sought out their own camping spots.

The Albany crew and some of the Esperance crew went on ahead and hoped to camp at Palm Springs, however it turned out to be little more than a “truck bay” although the springs were pretty. There were some aboriginal people there, fishing further up the creek. They told us to cross the road and backtrack a little bit to Saw Pit Gorge. We followed their advice and stayed the night there. Saw Pit Gorge is an extremely beautiful place and we all enjoyed swimming in the river there.

Sunday, 11th, an idyllic morning was spent at the Gorge, in paradise, eating a hearty breakfast and more swimming. Two caravans had already set up camp there and they had trouble trying to get out and back up the hill the following morning. So the tractors were put to work, towing them back out. One of the tractors had difficulty getting back up the steep incline. Wesley, driving ‘Priscilla’ pulled them over the top.

Many of the trekkers called in to see the “Great Wall of China” on the way to Old Hall’s Creek. It is a rocky outcrop resembling the wall. Very hilly country right into Old Hall’s Creek. We set up camp in the grounds of the lodge at Old Hall’s Creek. The weather was extremely hot, and many took advantage of having a dip in the ‘pool’ there. Not your average suburban swimming pool but more like a muddy lagoon, which was man-made, with a little island in the middle.

The trekkers congregated on the lawns after the evening meal for entertainment and fellowship. Ivan and Brenda, Susan and Donald played their accordions and drums. Later in the evening one or two of the locals played guitar and sang. Bob King gave a rendition of some of Roy Orbison’s greatest hits, much to the joy of the trekkers.

Some people got a bit of a head start and went in to Hall’s Creek during the afternoon to fuel up and get some food supplies before the big rush the next day.
Monday 12th and many of the travellers left early to start lining up for fuel in Hall’s Creek. David and Naomi McCooke left the trek at this point.

Hall’s Creek was the last opportunity for ‘real’ shopping on the Canning Stock Route. The only other place was an aboriginal community further down the track, but it was unknown as to what food items would be available. Some people had ordered fuel to be obtained there.

Most of the morning was taken up topping up stores and fuel. At this point, the trekkers felt that there was less need for ‘regimented’ organization and agreed to ‘make their own way out of town’, and head out to Wolfe Creek Crater National Park, which had mixed results! It is understood that a meteor impact a very l o n g time ago caused this huge crater.
The road into Wolfe Creek Crater had the worst corrugations experienced so far in the trip. The Dongara crew experienced more problems with their trailers and didn’t make it down as far as the camping grounds at the crater.

The committee discussed some of the problems that might be anticipated on the Canning Stock Route and decided to reorganise some of the groups. This resulted in creating 4 main groups. Esperance group, Albany Group, Bullsbrook and Dongara Group.

At the entry points on the southern and northern end of the CSR there were many signs warning people not to take trailers down the CSR. It was almost impossible to tow trailers without getting bogged over the dunes.

In July and August of 2000, the Chamberlain 9G Tractor Club of WA had trekked from the Most Western point of Western Australia to the most eastern point of Australia (Byron Bay, NSW), which included trekking over the Simpson Desert.

Many in the club felt that the Simpson dessert was the most enjoyable part of the trek, partly because of the feeling of being ‘alone in the outback’ and also because of the challenge. This challenge included the towing of trailers behind either the four-wheel drives or behind the tractors. There were some tractors that did not tow trailers, and these were available to pull the other vehicles through if they were having trouble.

With the experience of driving through the Simpson Desert 2 years earlier, it was felt by the club members, that they would manage the challenge of towing trailers over dunes of the Canning Stock Route.  The club does not recommend or encourage anyone to follow their example, as many difficulties and great damage was incurred with the towing of trailers.
The club fully endorses the advice given to travellers NOT to tow trailers. It is extremely unlikely that any club member who had participated in the trek would ever repeat the act of towing trailers down the Canning Stock Route.
Tuesday, 13th once again, Kim Henderson and his trusty welder were on call for an early morning start for repairs at the Dongara camp. By the time the rest of the Albany group arrived there, they needed some running repairs as well. Most of the morning was taken up making repairs.

The Billiluna community supplied fuel to a “few” trekkers but the shops were closed, and generally not much activity there. Just outside the community we caught up with a party of 4 or 5 four-wheel drive vehicles who had just driven up the Canning Stock Route (CSR) from South to North. They were pretty sure we would do it quite easily with the tractors!
All the trekkers finally caught up together at Stretch Lagoon, and held a meeting. It was decided that the Dongara crew were ‘self-sufficient’ and would lead the way while the remaining crews alternated their ‘order of departure’. Travelled on until about 4pm. Already the CSR was showing that there would be limited camping areas for the whole group to assemble together.

The Esperance and Bullsbrook group made camp on a clay pan while the Dongara and Albany crew kept going until they found a large enough clearing to settle in. There was plenty of space and plenty of mosquitos.

This northern end of the CSR had received “way above average rainfalls” over the last two years, and had been closed for most of that time. It was only at Kununurra that news was heard of some four-wheel drive (without trailers) making their way through.

Wednesday, 14th.  After a windy night, the Dongara group took off up to the ‘main’ track to meet up with the Esperance and Bullsbrook groups. Albany group was last with Stan and Noreen Snook acting as “Tail-End Charlie”. Warren (‘Rabbit’) led the contingent. However later on there was a bit of confusion as we reached Well 51 (now abandoned), as to which way we should go. Eventually, we all got on the right track and headed for Well 49, which was restored.

George Bass had two taps knocked off on the way. The dense scrub knocked the vehicles on the sides of the track, which was very narrow. Most of the trekkers filled their water vessels at Well 49, and some also had a wash.
The trek continued along the bush track, with some very precarious patches which were caused by the wash-outs, leaving large exposed rocks and deep gutters. The bottoms of these gutters had sandy bottoms, just to add to the interest! Several dingoes were sighted at various places by this time.

After Well 48, there was more confusion. Most of the trekkers had gone on into Beadles pool. The pool had dried up, and it was evident that there would not be enough room for everyone to camp there. It was decided to move on as it was only about 3pm, however the road was obscure and then seemed to completely disappear.

After a bit of reconnaissance the way ahead was discerned, and we proceeded on to a suitable camp. Two vehicles approached from the south, however they waited in a small “clearing” until we had all got into camp before they continued on their way. It was impossible for them to get past all of the trekkers, which were in convoy. All up, a total of 121kms were covered that day

Thursday, 15th and after travelling only approximately 40km from the previous camp, we came upon the first of the sand hills. Derek Henderson got stuck on the first big one, so he had to wait for a tow over. The tyres were all too tight to negotiate the incline, especially the ones towing trailers. Eventually after churning up some of the sand, making it difficult for the vehicles behind, they finally let the tyres down to a level which was suitable. There were some very rocky areas in between the sand hills.

Ivan Siviour sighted a camel during the morning tea stop, and the camel was kind enough to stay close by long enough for most of the trekkers to catch sight of him. We reached well 46 at lunchtime, – a restored well with winch and bucket. The water was a little cloudy and quite ‘hard’. There were big areas of magnesium on top of the ground further out. We “made hay while the sun shone” washing clothes and our hair, as long as the men were happy to winch up the water.

Time to move on, with the Dongara crew and ‘Rabbit’ Warren doing the reconnaissance. Like sheep, the rest of the trekkers followed until the cry went up ‘it’s getting boggy!’ ‘There’s water ahead’, and ‘don’t think there’s a track around.

A mysterious lake had appeared right through the middle of the track. There was no knowing how deep it was, but the lake was of considerable proportions and would easily have hosted and international water ski event! Eventually word reach back through the ranks, and people unhitched trailers, or simply hitched a ride down to have a look at the instant lake.
It was decided to set camp back at Well 46. This was a good place to finish off the washing, light fires to heat the water and have a decent “bush” shower. It was Derek Henderson’s birthday. ‘Big Max’ sent up a rocket as part of the birthday celebrations. The 9G South group presented Derek with a ‘birthday card’, which had all the trekker’s signatures onto an old discarded “Grid” sign. Gary Snook recited ‘My Boomerang won’t come back’.

Friday, 16th it was Dongara who led the way out of camp, back over the track we had gone in on the day before. On the way, they met up with two four-wheel drive vehicles from Victoria. They waited patiently for all of the convoy to pass.

Cumber ran into trouble a bit further down the track when the front chassis of his caravan broke. He called up for Kim’s welder. John Henderson offered some steel to help fix it. Stopped for lunch at Gravity Lakes.

The Bullsbrook and Albany groups camped in a burnt out area, with Dongara and Esperance camping in the dunes, not too far back. There were clear skies, but more wind, later in the night. 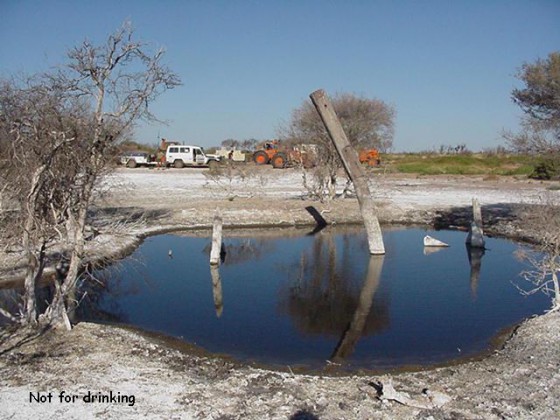 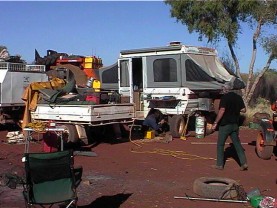 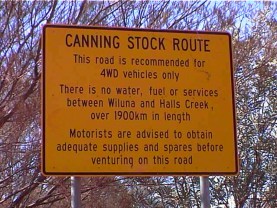 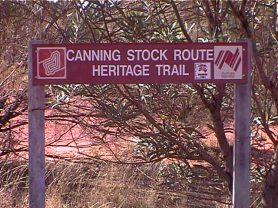 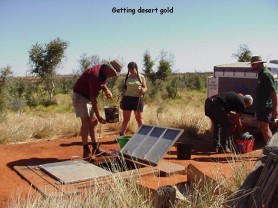 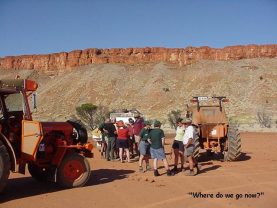 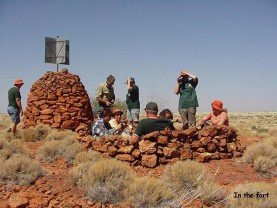 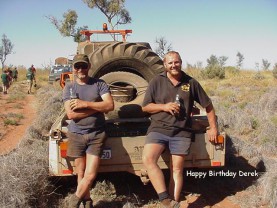 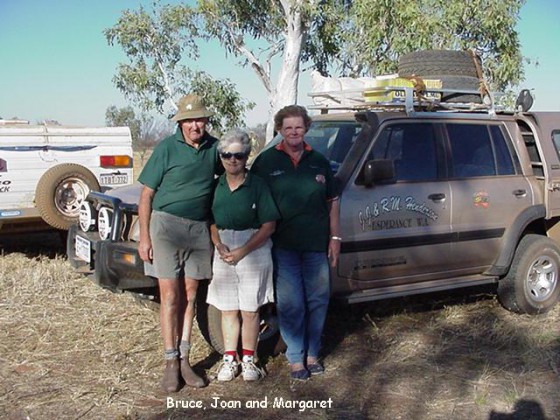 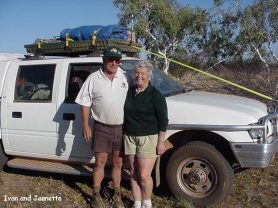 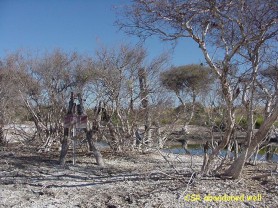 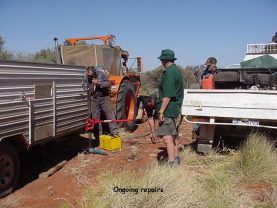 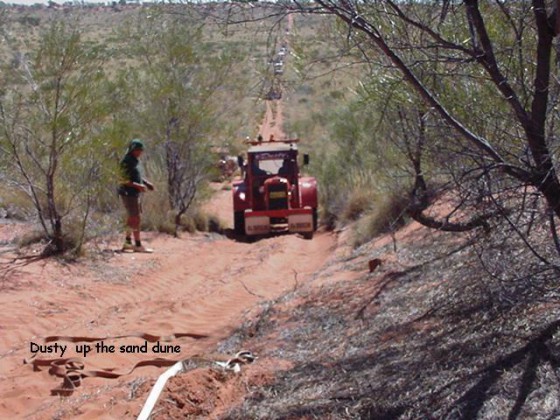 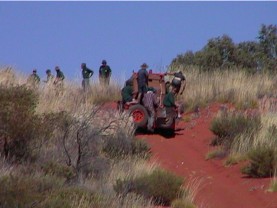 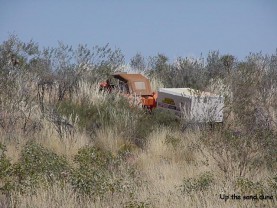 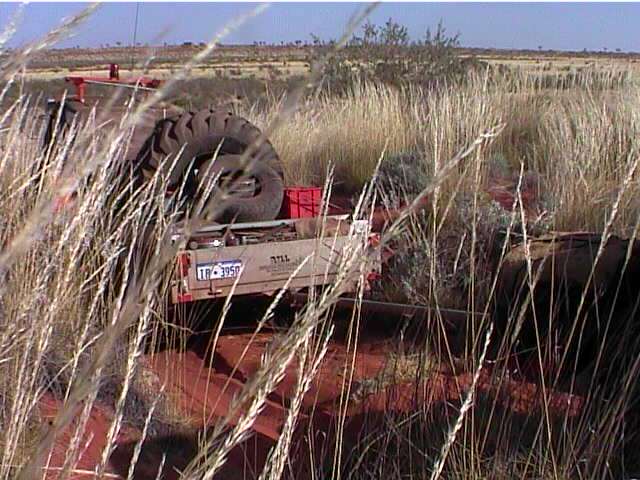