Sunday, 14th July and Jimmy and Faye Cole had a major blow out on their rear tractor tyre. Arrangements were made by two-way radio along the convoy for John and Derek Henderson to arrive into camp, and take the rear-wheel off their tractor and to then transport it back to where Jimmy and Faye were. With the borrowed tyre now fitted, the Coles were able to drive into camp. At this stage, arrangements were made for a spare tyre to be transported from Perth. This took a few days to arrive, and by the time it came, the trekkers had already departed the Karijini National Park. The Coles joined back up with the convoy at Marble Bar.

The camping area at the Karijini National Park was a fairly basic affair. As the school holidays were still on, the park was filled to capacity, and trekkers were grateful that the rangers were able to find a suitable place for everyone to park and set up camp. There were toilets available, but no showers. The ranger came and inspected all the National Parks Permits, which were then recorded.

After a very cold night, the next morning had many in the camp woken by the sound of dingoes. Apparently the dingoes had wandered into the camp, and Margaret McLaughlin reported that her peg-bag had been dragged along, spilling pegs on the ground. Cedar Armstrong showed his group the ice that had formed on the surface of a tub of water, which had been left out overnight.

The trekkers went every way possible to see as many of the gorges as they could. Some of these included, Fortescue Falls, Dales Gorge, Joffre Falls, Weeno Gorge and Fern Pool. Some of these sights were only 5 – 10 minutes from the camping area, and others were about an hour away using the tractors.
Late in the afternoon Russell Morgan and his father Harry, who had driven up from Perth, joined the group. Russell had come to collect his daughter Bronte who had spent three weeks with the Southern 9G Group after having joined the trek at Pingelly. A film show was hosted that evening by a C.A.L.M. activities coordinator. An interesting evening was well attended by trekkers who took in the open-air theatre, complete with coffee and popcorn.

On Tuesday 16th some of the trekkers broke camp and headed off to the Auski Roadhouse, where they made welcome use of the showers and washing machines. The rest of the contingent stayed on and enjoyed the sight-seeing opportunities. The Southern 9G group challenged the Dongara group to a game of Softball. Unfortunately, the ground was gravely and very slippery and a number of injuries were sustained during the game. A draw was recorded, although further challenges are unlikely without a suitable ‘field’.
The next day the convoy re-grouped at the Auski Roadhouse and continued on to Hill Side Station for another bush camp. The hills around the station are a very unusual formation, and from a distance, the rocky outcrops resemble chocolate drizzling down the sides of a yummy cake. (Probably Chocolate Mud Cake)
There were a few sightings of the Sturt Desert Pea, in flower, although there were many more plants in bud quite a while away from flowering. Rock Wallabies could be seen from the campsite jumping over the rocky terrain.

Many of the sub-groups within the convoy carry demountable ‘bush showers’. Generally, these consist of a shelter, made from a poly-tarpaulin around a frame. Water is heated in a bucket on the campfire, which is then poured into a canvas bag with a showerhead attached to it. With the bag attached to the top of the shelter, a very welcome shower can be had. It is amazing, that when such conditions prevail, how little water one actually needs to get clean. This is a very good lesson to take home.
Thursday 18th July and most of the trekkers left Hill Side Station and proceeded on to Marble Bar. Max Smith was fortunate to ‘run into’ the station truck and ended up being taken in the helicopter to help with the mustering.

Hugh Campbell had ‘contacts’ who were involved in a gold mining operation, which could be accessed through a by-pass road through some very beautiful country. This detour took in about 240kms. The group travelled along flowing creeks, through some particularly handsome ranges with lots of lush growth, which tempted the travellers to stop. Undaunted they continued on (even though a couple of punctures were sustained along the way) and finally arrived at the site around mid-day. The miners onsite were well pleased to see some new faces, greeted the trekkers and offered a lunch consisting of pies and sausage rolls, kebabs, jelly cups and tea and coffee.

Many of the trekkers were looking forward to checking out the local hotel, which reminded them of other outback hotels experienced on the last trek like the Birdsville Hotel.
Friday 19th July, it was time to enjoy some local sights at Marble Bar including the Chinaman’s Pool, Marble Bar, the Jasper Mine and the Gold Mine. The group travelled on out to the banks of the DeGrey River. This was a very picturesque place, and the trekkers were happy to spread out right along the banks and under some lovely shady trees to set up camp. A good place for camp fires, an evening meal and lots of camaraderie.

Saturday 20th, another day on the road. A footy tipping exercise was held over the two-way radio, with everybody tipping the winner for the Derby between the West Coast Eagles and the Dockers. Kim Henderson won for his tip for the Dockers to win by 20 points. (They eventually won by 30 points!) Thankyou to Ken Ore and Foodland for the prizes for the football tipping exercise.

Brenda Dowsett set up a music corner in the Eighty Mile Beach Caravan Park, and entertained fellow travellers with music and song. As Brenda played her piano accordion Ivan Siviour accompanied her on drum, and Susan Henderson on the Keyboard. Fiona Nunn played her keyboard and sung a number of songs.
A photo shoot was held on the 80-mile beach with all the tractors lined up in front of the waves. 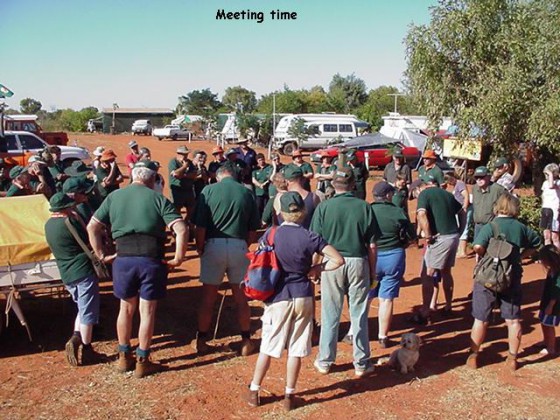 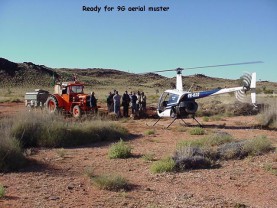 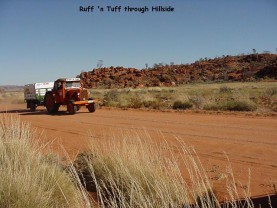 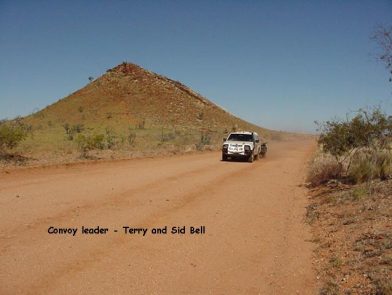 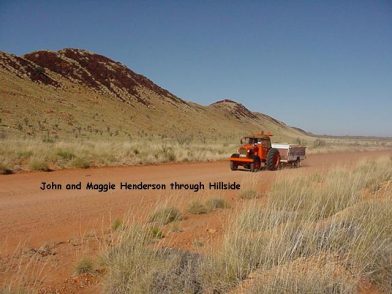 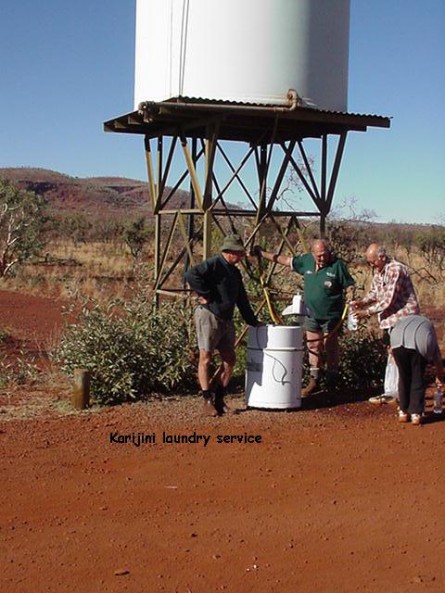 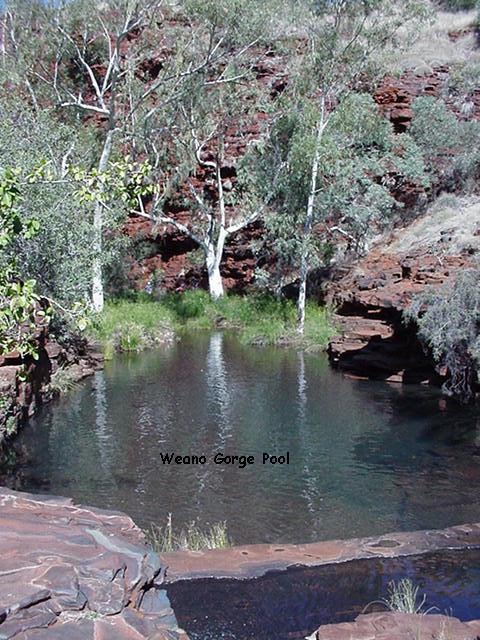 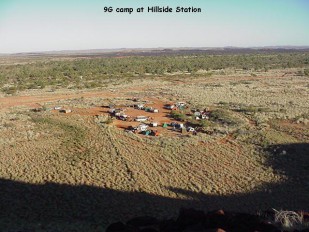 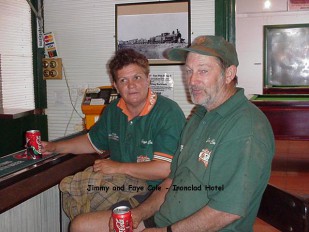 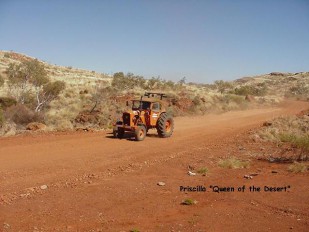 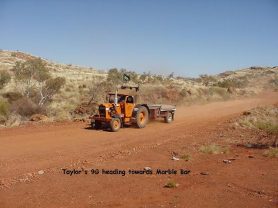 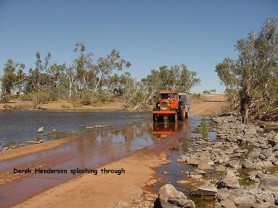 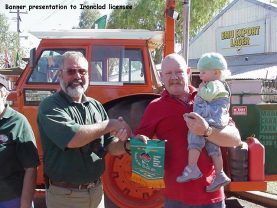 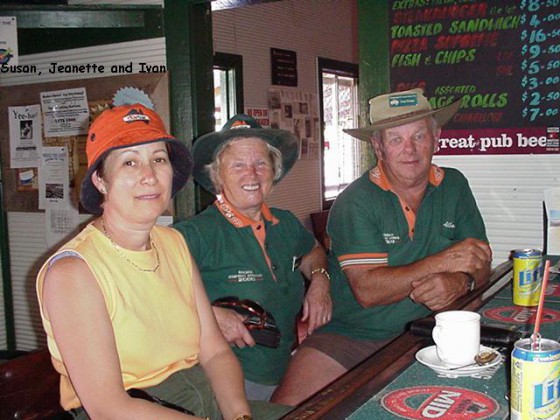 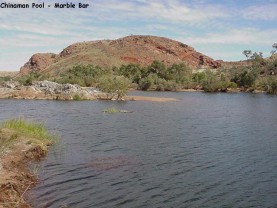 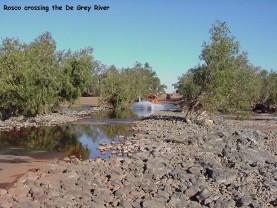 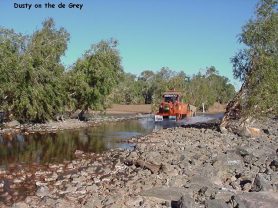 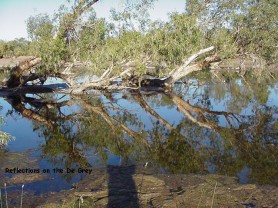 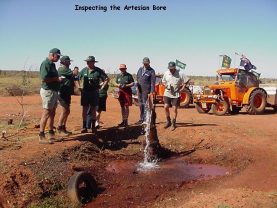 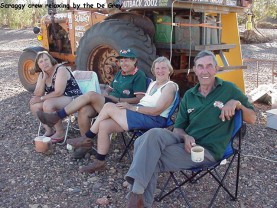 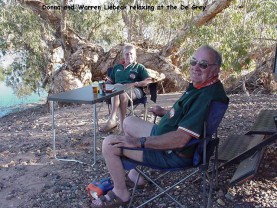 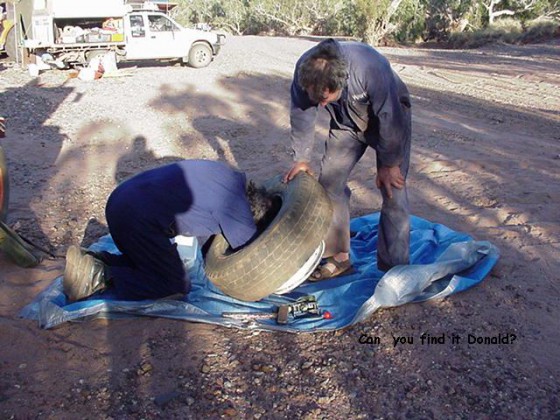 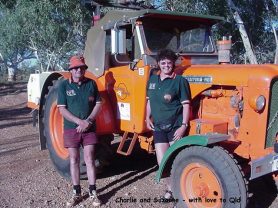 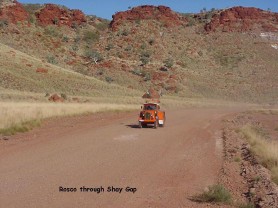 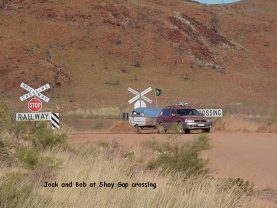 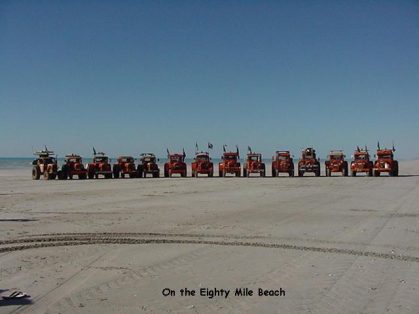 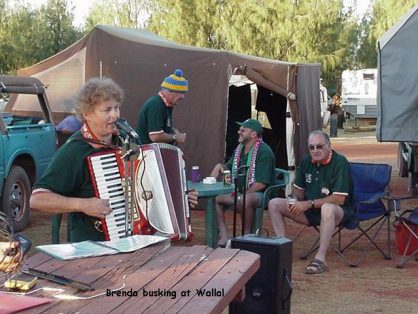 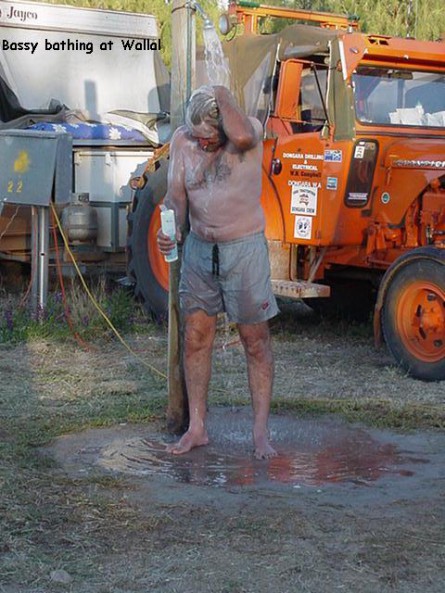 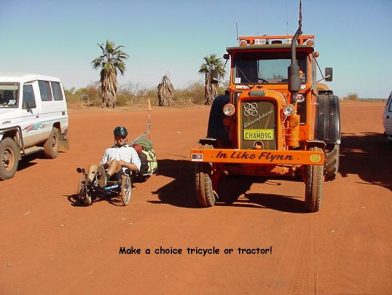 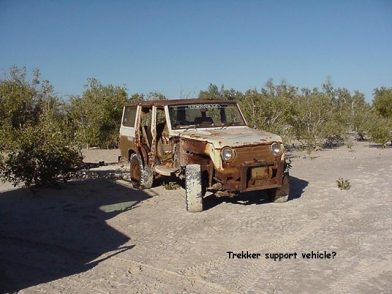