Day 8, with most chores completed, we headed out of Meekatharra at about 2.30pm with the aim of getting within 100k’s of Wiluna before camping up for the night.  Harry undertook major repairs on his trailer in Meekatharra so he and Walter rejoined us later in the evening.

Day 9 saw us camped at Gunbarrel Grapes Wiluna for the night having been joined by our additional support crew in Barbara and Dick Garnett.  Since leaving Port Denison on the 3rd we have done some 1274k’s and were now preparing  for the long haul over the Gunbarrel Highway and beyond towards Warburton.

The men in the group (being the majority– 3 Ladies to 8 Men) had taken to damper making with Allan starting the ‘competition’ then George contributing with his cheese and bacon speciality.  It seemed that dampers were going to be almost a nightly treat while each fellow tried to gain best points for his presentation.

Being a re-enactment of our 2000 trek many stories have already been told around the evening campfires usually commencing with “do you remember when……………….”

Day 10 at Gunbarrel Grapes, Wiluna saw us all wake to some degree of condensation in our various modes of accommodation so it was agreed that we would make a slightly later start – approximately 9.15am – just to allow a bit of drying out time.  As we headed east the road conditions were very good – almost to the point of being a little boring when it is adventure in our 9G’s that we were all there for – after covering some 245km’s for the day, we finally made camp at which point we were approximately 85km’s from Carnegie Homestead.

During each day we took a little time out to enjoy any points of interest along the way or just to stop and enjoy a cuppa and a bite to eat in the ever changing bush surroundings.

Day 11, now 1520km’s from our start at Dongara we left camp at 8.30am continuing on the fairly easy going road in to Carnegie arriving at about 10.30am.  Two of our support vehicles had some issues with tyres during the early part of the day, so our stop at Carnegie gave the opportunity for all tyres to be repaired, have our lunch and generally attend to a few chores.  On leaving Carnegie we travelled another 75km’s before making camp for the night at around 5pm.

Always on arrival into our campsites the first thing that seems to happen is that the fire is started – all who enjoy camping out would agree that this is a very special part of bush camping not only for camp oven cooking etc but also for the opportunity to sit around and tell a story or two or just enjoy general chatter.  Watching those dancing flames can be so relaxing.

Day 12 we were up and on the road by 8.15am allowing us to again take in a couple of points of interest along the way including the Mt William Lambert lookout which provided a wonderful panoramic view of our whole surroundings.  When we reached the junction of the Gunbarrel Highway and David Carnegie Road, we turned left after reading the sign for the Mungili Ruins.  We thought this sounded an interesting sightseeing opportunity and were also aware that we could then cut across from there to rejoin the Gunbarrel Highway further along the way.  We did the 17km’s in to the site where we found that the ruins had been removed but to our surprise there was a sandalwood production operation being run there by a local indigenous community.  What an interesting place to visit and learn about from the local folk who were on site.  This appeared to be such a positive venture amongst so much negativity often portrayed in the indigenous society.

After what we all found to be a very interesting interlude to our morning, we headed east from Mungili on what turned out to be a challenging, exciting road back to join up with the Gunbarrel Highway.  The track conditions turned into exactly what folk like Cedar Armstrong and George Bass (both currently taking part in this re-enactment trek) and many others who were part of the Club’s first trek in 2000 have told stories about many times over.  To most of us who were not on that trek the adrenalin really began to flow.  Finally the boredom of long straight gravel roads gave way to true adventure!!!

These ‘adventurous’ conditions took us on thru Day 13 and into day 14 when, still on the Gunbarrel Highway, there were more challenges to face.  We again took the opportunity to check out some of the water bores along the way as well as markers placed by and dedicated to the famous surveyor Len Beadell  – as we stood beside this sort of monument so very far from anywhere, we could only wonder in awe at the accomplishments of those early pioneers of our amazing outback land.

George carried out a small welding job on the new hydraulic system which had been fitted to his camper before we reached and turned on to the Heather Highway.

The first 30+ks of the Heather Highway (our chosen route down to Warburton) continued in a similar vein to the challenging conditions on the previous days but once over that, we were on the long straight runs of well maintained, unsealed road once again.  It was on that road that ‘Plains Wanderer’ (part of the South Australian contingent of the group) had a puncture to one of the large rear tyres, so quickly repairs were under way on the side of the road and we were back on our way within 1hr 45mins.  Once we turned on to the Great Central Road we decided to make camp for the night some 25/30km’s west of Warburton.  Another good night around the fire was had by all.  Our nights are not generally very late as everyone is usually quite ready for bed by the end of the day. 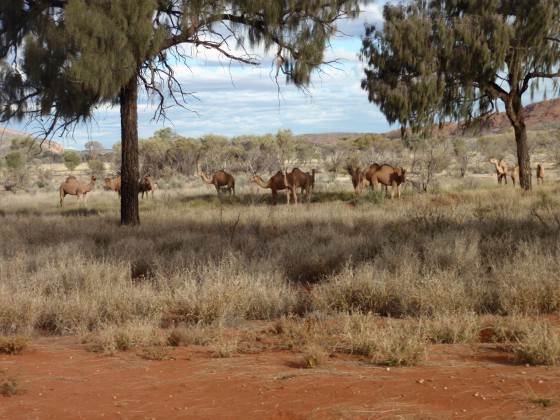 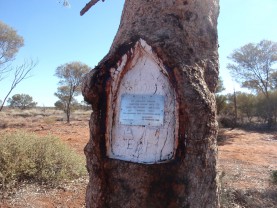 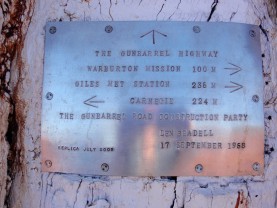 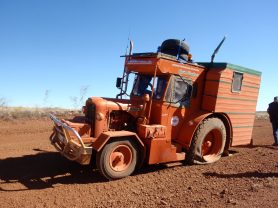 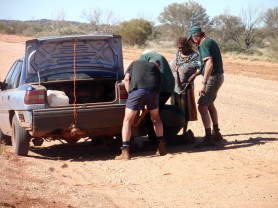 Helping out with repairs 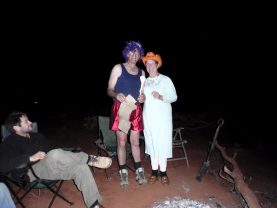