Saturday 17th July – day 15 – commenced with the short run in to Warburton where fuel and water were taken on and a few purchases made from the local store plus the opportunity for all to make use of the telephone service and touch base with those at home before we were once again on the Great Central Road heading towards Warakurna/Giles.  A large herd of camels on the move were a highlight as we travelled along but alas they were too far away for any good photo opportunities.  We all enjoy the odd sightings of any wildlife during our travels each day, to this point they have included of course camels, bush turkeys, dingoes, kangaroos  and snakes to mention a few but given the vastness of our country we sometimes wonder why we don’t see a lot more.  During the day our men Allan, Cedar, Walter and George were called up by Dick to lend a hand to an indigenous lady who had a flat tyre.

She was travelling from Warburton to Docker River with one child, bald tyres, no jack, no spare water, and a leaking fuel connection, all conditions in which none of us would ever leave our own driveways let alone head out into the outback where there is nothing from point A to point B!! Anyway the fellows did our Club proud and changed the flat tyre for the bald spare tyre, made a temporary repair to the fuel line and we had the lady happily on her way!!  She even mentioned that she took photos of the tractors at Giles in the year 2000.  Some 20km’s further up the road, having passed the South Australian contingent of our group she was once again on the side of the road with another flat tyre so Dennis and Eric did the good deed this time repairing the tyre for her.   We didn’t see her again but all wondered and hoped that she and her child did make it to Docker River without any major issues!!

Our chosen campsite was in a gravel pit some 40+km’s west of Giles.  Our pleasure around the campfire that night was a shared soup meal with the choice of three homemade soups (carried in the freezer since our departure at Dongara) and a savoury pumpkin damper made by Allan – that damper took Allan back to being just in front of Eric and George in the damper making competition to date!!

After dinner Eric, with the assistance of chief trek fairy Wanda,  performed a very amusing skit – Eric has shown a hidden talent for verse as we have gone along the way!  On this night Dennis and Noeline decided to go on in to Warakurna to the caravan park to enjoy some of the comforts of home including normal power allowing for the use of their TV plus washing machines, dryers and unlimited showers.

Day 16 we awoke to an overcast, slightly breezy morning although this cleared during the day. As we did the 40+km’s in to Warakurna/Giles, it was agreed by all who had travelled this way before, that the new Great Central Road is a far cry from the old road used on previous treks.  After morning tea near the Giles weather station we continued on towards Docker River calling briefly in to Lasseter’s Cave.  A great sighting of a herd of about 17 camels during the afternoon was a real highlight and allowed for what we all hope will be some great photos.  We made camp in a roadside camping area at about 4.45pm- a fairly quiet night for all.

Day 17 we left camp just after 8am to move on towards our first ‘treat’ for the day – a visit to the Olgas, often agreed by folk as being more impressive than ‘the rock’.  After wandering and enjoying the surrounds here we moved on to Uluru – ‘the rock’  – taking many more photos (even though most of us are lucky to be able to say that we already have the same photos at home in our collections).  After enjoying a light lunch and some time at Uluru we checked in to the Ayres Rock Caravan Park for our two night stay allowing sorting and re-organising for the next part of our journey.  We all enjoyed an evening barbecue at the Pioneer Resort before turning in for a good night’s sleep with no particular ‘get up’ time!!  Our second night at Yalara saw us enjoy another night of fine dining at Gecko restaurant where we all had a good laugh together when it was realised that each and every one of us had ordered a seafood meal of some sort  – what else would you order in central Australia!!!!!

To most of us home is looking further away now as Byron Bay comes ever closer although with only 2698km’s behind us we know we have more challenges to face yet before we reach that final destination.

Day 19 we made a leisurely departure from Yalara heading towards Curtain Springs.  It had been hoped that this would be where our next camp site would be (as it was in the year 2000) but with the progress of time and the sometimes apparent poor behaviour of travellers through private property, the current owners have ceased to allow camping at any of the waterholes or any other areas on the property. The only area set aside for stopovers was their camp area on the roadside near the store/restaurant and their private residence.   So most of us enjoyed a gourmet burger served under the bough shed along with a very informative chat with the owners about life and trials of living in these remote areas.  Following this we all took to the road again heading towards the junction of Lasseter Highway and Luritja Road where we turned left and made camp a short distance from the intersection.  During the previously mentioned chat at Curtain Springs, we were made very aware of the problems caused by camels on these outback properties and the vast numbers that roam the countryside. To us as travellers/tourists the sighting of camels (as previously reported) generally causes a degree of excitement and a lot of camera shooting but to know of the problems they cause has somewhat changed our thinking.  Our thoughts are now genuinely with the land owners who suffer so much damage to their property.  Around the campfire that night we all enjoyed listening to Len Beadell’s address to the Shepparton Rotary Club some years ago. To anyone who has had the opportunity to hear it, you would understand that it was a good, light hearted way to end another great day on the road.

One of the very special sights of the day was that of Mount Connor.   Whilst only seeing it from a distance as we travelled along, it certainly was an impressive sight on the skyline.

Day 20 began with a normal start but just as we were ready to leave the campsite the youngest member of our group – Walter James – cut his shin quite deeply, causing a re-assessment of our travel plans.   We were able to attend to the injury with one of the normal first aid kits carried in each of the tractors but it was then decided that it should be attended to by a Doctor.  Given that Alice Springs was only some 2 to 3 hours away on the main road, Harry and Walter left in one of the support vehicles, Dick took over driving Harry’s tractor and Barbara drove our other support vehicle with Anne as companion.  Walter’s wound ultimately required four stitches and we were not to meet up with them again for four days.  Unfortunately for them they missed three of the most amazing, challenging days as follows.   After the events of the morning we were eventually under way at about 9.15am moving on towards Ernest Giles Road where we then turned left and on in to Finke Gorge.  Washouts and water crossings started almost immediately being, for most of us, the commencement of, as stated, one of the great challenges that make trekking in our 9Gs so much fun.  It turned out that we actually had to ‘blaze’ a new trail through the Gorge following recent flooding in the area.  Four years ago several of the group had gone through the Finke Gorge in one day on our Cape to Cape trek but this was not to happen this year!!!  At about 5pm it was time to make camp and have a fairly early night ready to face it all again the next day.

Day 21 dawned and we were up and on our way by 8.30am, straight in to the next river crossing!!  So it continued throughout the day – we actually did approximately 25km’s for the whole day.  At many points it was a matter of members of the group walking ahead to access the situation and maybe try to pick up ‘old tracks’.  There were times when the words “maybe we should turn back to the main road” were heard but really this was the last option for most.

Not only was walking ahead part of the process but we also had members who stripped down at water crossings to walk ahead and mark a trail through the water with stakes for the rest of us to follow safely.  Again we have to say not a lot of kilometres were covered but the challenges were multiple.  Having Dick in Harry’s tractor without towing a camper made it all a lot easier especially for going ahead to check the route and also for towing up embankments and in very sandy riverbeds where some of the group chose to venture at times.  To other Club members in particular, relating to “doing a Cumber thing” would be understood and by the end of the day we had renamed Allan – Allan “Cumber” Faulkner!!!!  That innocent look and comments like ‘I just thought I would check out an alternative way’ could be heard as he was towed out and back on to our ‘official’ track.

Every corner turned held something new or challenging but nothing that made us feel we could not overcome.  Again at the end of day two on the Finke our campsite on the river bed was a welcome sight and an opportunity to assess “where the water got in”.  Any necessary cleaning up took place then it was time to put our feet up and chat about the days happenings. 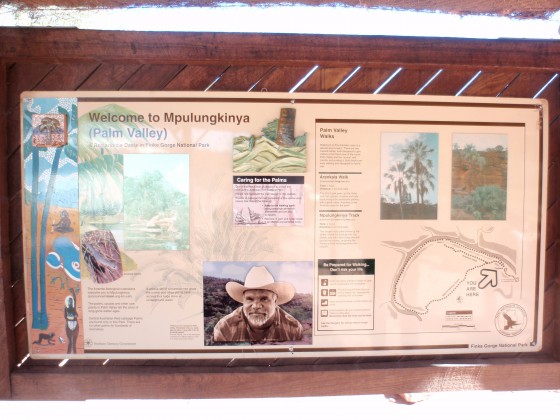 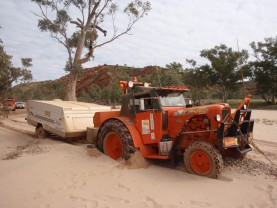 Time for a tow 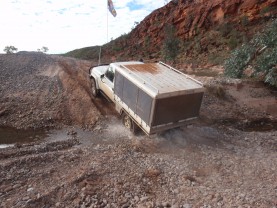 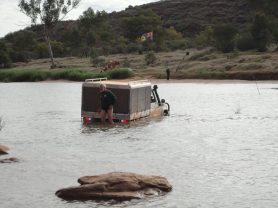 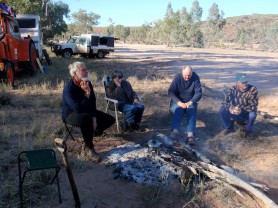 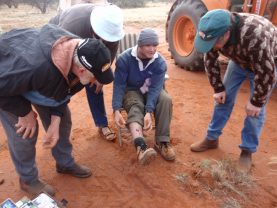 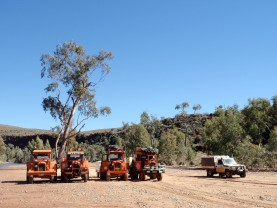 Lined up and looking good 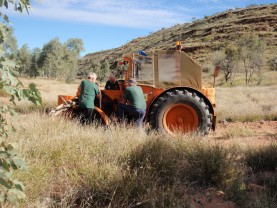 Time for a chat 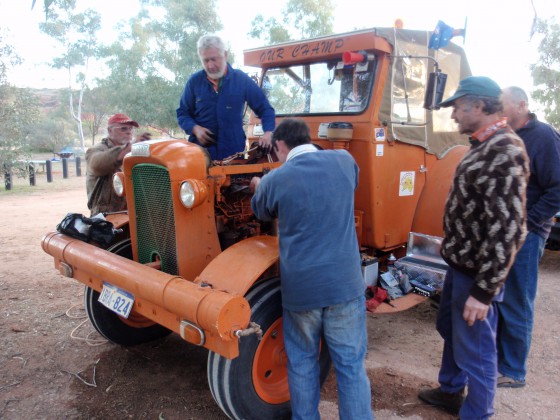 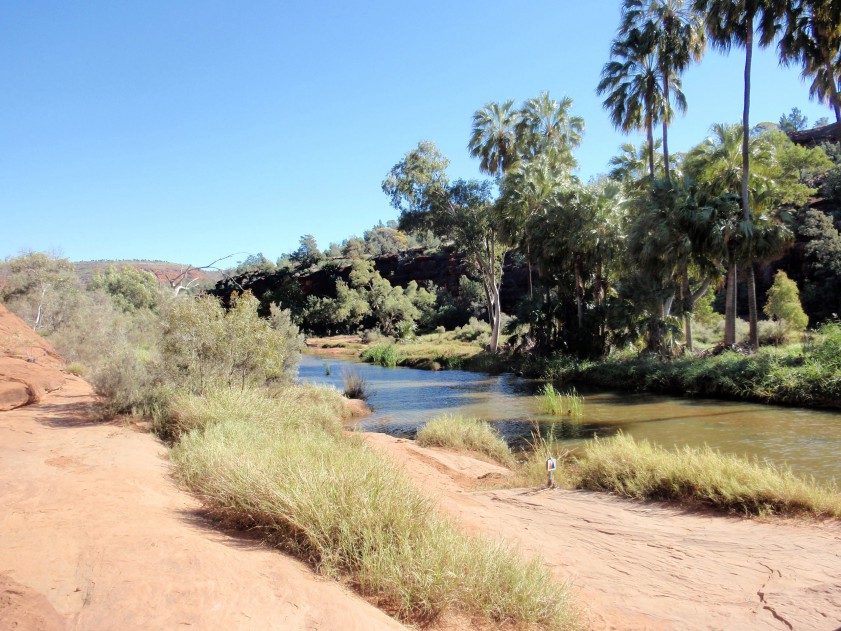