Day 22 we awoke to a dampness in the air – not exactly condensation inside but dampness outside –  so for most of us it was decided to wait until the sun was high enough to dry things off a bit before we packed up and continued on.  Our South Australian contingent decided to move on earlier to address prior commitments, believing (and rightly so) that the ‘worst’ of Finke Gorge was behind us now.  Later in the day they rejoined us at Hermannsburg.  For the remainder of us a leisurely exit from the Gorge was enjoyed with only a couple of small waterholes and embankments to be completed before lunch on the river bed then a drive out to the Highway on a well maintained gravel road.  As mentioned earlier, some of us had fond memories of the Finke Gorge in 2006 with its river and water hole crossings but our 2010 adventure will remain special to us.  As a result of recent flooding in the area we made numerous river crossings and crossed many water holes throughout our three days.  We were truly disappointed that Harry and Walter missed this part of our journey but pleased to say Walter ‘made a complete recovery’.

At this point we all want to pay tribute to our relief support vehicle driver Barbara.  What an amazingly capable lady.  There was not one time that she reacted to any of the challenges to be faced even calmly saying to Anne at one point “my feet are in four inches of water”!!!  Well done Barb.

Once we arrived at Hermannsburg we took a brief look around the settlement before heading off to Palm Valley where we were to have Harry and Walter rejoin us.  On the way in to the valley, Harry’s tractor (now affectionately renamed by us as ‘Uncle Harry’) decided to ‘act up’ and ended up having to be towed in to our campsite.

With Barb still at the helm of our support vehicle she had to do the towing while Dick guided the tractor.  Another very capable, confident display thanks Barb.

The designated campsite at Palm Valley is well worth a mention with its immaculate ablution block, piping hot showers (supplied using solar power), beautifully maintained coin operated barbecues and generally well kept surroundings.  Sitting right on the edge of the Finke River setting up camp there for the night was a real pleasure..

Day 23 saw Harry, Walter, Cedar and George carry out the replacement of the head gasket on ‘Uncle Harry’ in the morning while the remainder of the group took in an informative, enjoyable guided walk at Palm Valley.

As in 2000, Alice Springs was to be a major stop for us to allow for restocking our stores, cleaning and checking of the tractors and general bits and pieces before our move on towards Birdsville via the Simpson Desert.  ‘Uncle Harry’ also had the necessary work done to be ready for the next part of the journey.  Bob King, Chamberlain club member and interested party in ‘Uncle Harry’  joined us with his friend Maureen at Alice Springs, planning to travel with us to Mount Dare but unfortunately Maureen’s ill health changed these plans somewhat.  Noeline Hill returned to South Australia as planned.

Our break in Alice Springs also allowed us to enjoy some more ‘fine dining’ (not that we did not do that around the camp fire!!) at local restaurants patronised on previous treks.

In undertaking this as the official trek for 2010, it was agreed that we would carry the official club collection tins in each tractor and vehicle as well as having a small amount of merchandise available if required.   As ever, we were in awe of the generosity towards our fundraising by the general public.  Not a day passed that we were not asked if we would accept a donation.  Our sincere thanks must go to all concerned.

Day 27 saw us ready to get back on the road.  From Alice Springs we went south east towards Santa Teresa on unsealed but well maintained road.  After a brief stop there we headed to Alambi Station to pick up the road to Andado but this was where we faced our first “road closed” sign so had to back track to the Deep Well access road.  Allan made a telephone call to the Deep Well Station and we were willingly given permission to pass through the property (calling at the homestead on the way).  After chatting with the owners for a while and being given alternative directions, we continued on to the Old Ghan Rail Track Road.  A few earlier threatening clouds, thunder and lightning and some spots of rain lead to a heavy downpour just as we were about to set up camp at the historic Rodinga siding.

Setting up was a little more difficult than at previous sites but we all ended up around the campfire later in the evening discussing the happenings of the day and pondering the conditions to come following the latest rain in this area.

Overnight there were two or three short showers and some very strong wind gusts but day 28 dawned reasonably dry – albeit muddy!!!! – as well as overcast skies.  Bob rang to tell us that Maureen was going to be hospitalised for a few days so he would join us later that day for an overnight camp.  We broke camp at Rodinga at around 8.30am to face some very slushy conditions and major washouts – nothing that we had not expected though.  At about 10.30am we had our morning break so that we could listen to a radio interview that the group had done with the ABC whilst we were in Alice Springs.  Our day’s travelling continued on the Old Ghan Rail Track Road – originally actually the rail track through the area but in later years formed to make a road – there were even times when the old sleepers could be seen through the roadway.  Sightseeing stops were made during the day, mainly being at historic rail sidings including our lunch break at Bundooma siding.

Whilst here a passing motorist stopped to talk to us, these folk were from Finke (our next destination) and were heading in to Alice Springs for a few days.  They made a very generous donation to us saying how important the Flying Doctor was to those living in remote areas.  We had a very interesting conversation with them as they had spent many years in and around the outback.  The lady was Principal at the Finke School (and had been so for a number of years).  We arrived at the small community of Finke at approximately 3.30pm where Bob caught up with us.  Most of us made this an ice cream stop after which we continued on for another 10/14km’s before picking a camp site for the night. 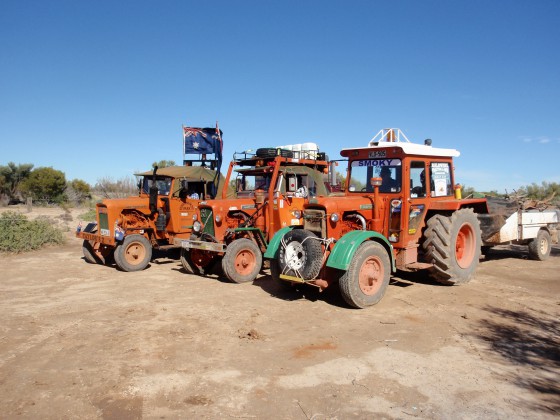 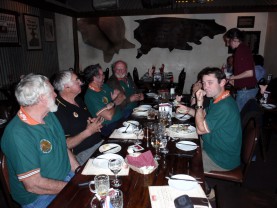 Eating out in Alice Springs 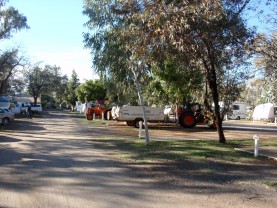 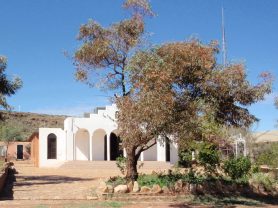 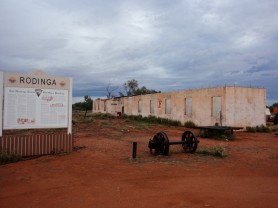 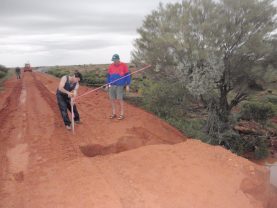 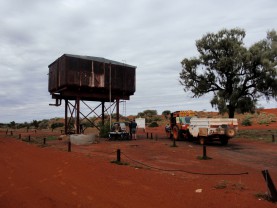 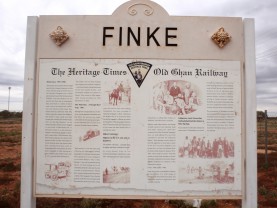 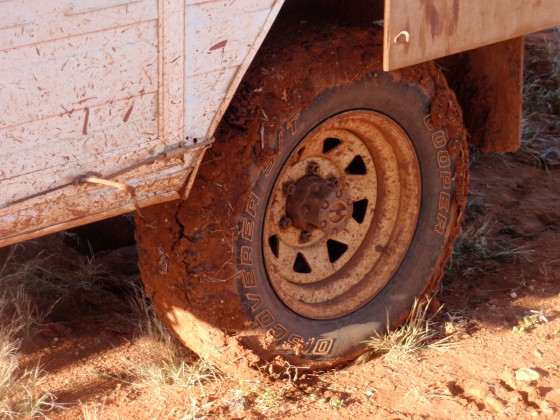 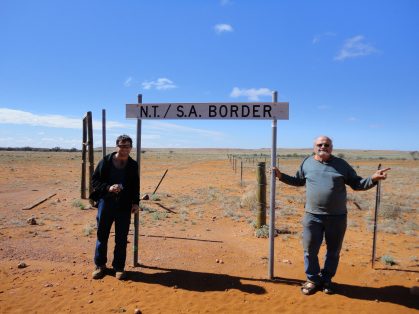 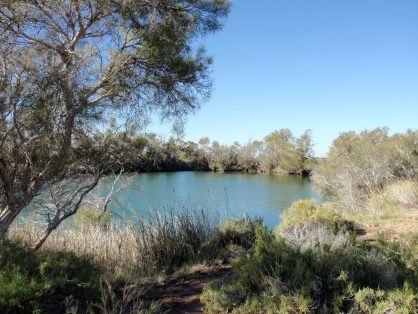