We were all up bright and early on Day 43, although still had to contend with some condensation dampness – one of the joys of camping!!  We were on the road by 8.30am and enjoyed a fairly leisurely run in to Eromanga – some 60+k’s – during our drive along the Cooper Development Road we came across a memorial site dedicated to a young man – Angus Steele Chapman.   One cannot help but wonder when we read the inscription, he was only 30 years of age when he died (we were later to learn that this young man had died in a motor bike accident).  We arrived into Eromanga at about 11.30am and after fuelling was completed it was time for lunch at the local cafe – great burgers.  After lunch we had a look around the town then followed directions given to take us to the operating oil field which we had been invited to visit.  We arrived there at about 3.30pm and were shown to where we could set up our campsite.  We spent two most enjoyable and informative nights as guests of the company and felt privileged to have been given such an opportunity.  We also enjoyed the experience of being able to do some opal fossicking with a few good results although none of us felt that we could retire on our finds!!!!

Day 45 we said our farewells to the crew at the oil field and returned to Eromanga.  This was where we were also going to have to bid a fond farewell to Barb and Dick as they had to start making their way back to Gnowangerup for commitments at the end of the week.  The remainder of the group decided that a night at the Eromanga Caravan Park was the order of the day to catch up on some washing etc.  Eromanga turned out to be a very interesting little town.  With a population of approximately 80 people there is an oil refinery right in the town which takes a very large proportion of the oil found in the area; there is a fossil digging area just out of the town where dinosaur fossils have been found and are processed for three weeks each year; opal mining is predominant in the area and it is where Steve Fossit – balloonist – landed when he came down short of Birdsville a few years ago just to mention a few things.  They have the most amazing Living Museum with a very informative movie giving the history of the area which we all enjoyed.  The town comes under the Quilpie Shire and appears to have all the facilities a small town could want.  Quilpie, some 106k’s away, is their closest larger centre for shopping and business needs.  The local cafe has a small Australia Post outlet as well.  There is a fairly large fly in, fly out work contingent in the town as most people were mainly involved in the oil industry.  We spent an enjoyable evening mixing with the folk at the motel then enjoying a nice meal at the local hotel.

Day 46 began with all of us meeting at the cafe (as numerous other folk seemed to do as well) for breakfast  then making one last call in the town to their lovely little school – a total of 5 students! This was a real highlight for all of us teachers, students and trekkers.  Something like this creates a very special moment.  The children, all junior primary, were so excited with the tractors and were full of questions but the one that really hit home to all of us was during our talk to them a school bus was mentioned and one child asked “what is a school bus?” – how amazing.

They are going to be taken to Brisbane next year on a school camp – we can only imagine their eyes then.  They do have interaction with distance education children and also with the school in Quilpie.  Our day on the road started after this visit and we headed to Quilpie where it was hoped that we would get some internet coverage so we could get our very overdue report out to everyone concerned.  Our arrival into Quilpie gave us time for a fairly brief stop to have lunch, stores replenishment and CONNECT TO THE INTERNET!!!  Whilst we did not have any specific plans for a school visit here it was a great pleasure to have students from  St Finbarrs school brought to Bassy’s 9G to touch and feel our old machine and learn from us all about it and what we are doing during our trek.  Thanks to Mr Litchfield and students.

On leaving Quilpie we headed south to Toompine known as “The Hotel without a Town” (another fondly remembered stopping point for our trekkers of 2000).   These small hotels in the outback now rely largely on the tourist trade and with the offer of free camping, including piping hot showers to boot, it was hard to resist the sign pointing to them.  Greg Datz, the licensee of the Toompine Hotel along with his ‘bright light’ Jonesie behind and in front of the bar and Marise, a delightful German back packer who was working at the hotel for a few weeks, offered such wonderful hospitality to all who entered.   We all enjoyed a great meal that evening as well as a breakfast with the works the following morning.  During the evening we met up with Di and Roc from Falls Creek who said they had been behind and in front of us since Alice Springs and who we then continued to meet up with at various points, right up to Nindigully where we said our last goodbyes.  Thanks for your company folks.

Day 47 – Following our breakfast at Toompine and some more enjoyable time spent with Jonesie watching her tend the vast menagerie of animals housed behind the hotel including camels, donkeys, llamas, goats, ducks etc etc, it was time to say goodbye and be on the road again.  As we travelled along we (the 2000 Trekkers) remembered a very special night in 2000 when we were hosted, by Randall at Bundoona Station, to a wonderful camp oven dinner (for all 120+ of us) and we were thrilled to suddenly hear him come on to our radio channel asking if we were the Chamberlain 9G Tractor Club who had just passed by his property.  That was one of the very special moments of our trek just to be able to bring him up to date on where we (the Club) have been and what we have done over the years.  It was also special to know that he is going well and still enjoying life on his station.  Having determined that he had not seen the 2000 trek DVD we organised to leave a copy for him at the Cunnamulla Post Office.  Eulo was our next stop for a short break with time to check out the Date shop with their great products including the Date Liquor and Wine again remembered from our 2000 trek.  Then it was on to Cunnamulla.  After some more meet and greet time and taking the opportunity to deliver the DVD for Randall, we were ready to continue on when a journalist, owner,  operator of the Warigo Warrior, stopped us and asked about catching up with us at our campsite the next morning for interviews and photographs.  This was organised and we then took to the road.  A campsite was chosen about 30k’s East of Cunnamulla.

Day 48 – 18th August, 2010 – dawned beautifully amongst the trees.  This day had a special significance to the group (as it has done on past treks) being that of Long Tan Day when we take time to remember the Vietnam War and our Veterans.  Even being a small group we intended for it to have the same speciality as ever.  As birds chirped in the bush surroundings and soft Australian music played in the background, a very moving service was held.  Allan commenced with a few words then followed with the reading of a poem “Lost Youth” by Lachlan Irvine.  Harry James (a Vietnam Veteran) recited the ODE and a silence was observed.  Allan then read another poem (both poems were chosen by Harry) called “He was a Mate” again by Lachlan Irvine.  After this Harry spoke a little about Men and Women in the Services, Post Traumatic disorder and the support offered on returning to Australia after service.  We then remembered the Australian Forces of today wherever they may be serving.  Following this we enjoyed a lovely bacon and egg breakfast together and took time to enjoy the surroundings for a little bit longer.   Our reporter ‘friend’ James Clark then arrived for the interview about us and our Club etc and a photo shoot before we continued our travels on the Ballone Highway in to Bollon and on to St George.  During our stops at these centres we really did hear some amazing stories of the floods which took place as recently as March, April – there were certainly some incredible happenings.  Even being shown photos still made it so hard for us to believe.  Whilst in St George we all took the opportunity to cast our vote for the forthcoming elections.  After St George we travelled some 40k’s to the famous Nindigully Hotel (yet another place of very fond memories of the 2000 trek) where we set up camp in the grounds and again enjoyed the offer of hot showers before another night of ‘fine dining’ and hospitality.  Overnight there were a few rain showers but all was well in our camps!

Day 49 – everything  was fine when we woke up and once we were  packed and ready to leave, we lined up in front of the hotel for a photo shoot  as requested by the licensee ‘Burnsie’ (the company name being “Bindrinken Pty Ltd”!!)  along with other travellers camped in the grounds.  Burnsie then made a generous donation to our fund raising and requested details of possibly becoming a member of the 9G Club.  So we look forward to hearing from him hopefully in the not too distant future.  Thanks for everything Burnsie.  By 9.30am we were on the road and heading towards Goondiwindi where we had booked a campsite at the Gundy Caravan Park – it was time to catch up with washing etc again!!  Harry met up with friends on arrival into Goondiwindi and arranged for all of us to join them at the local RSL club for dinner.   An enjoyable night was had by all.  Also whilst in Goondiwindi some of the group were approached by a young lady who was asking about the tractors and our treks and mentioned that she and her family had seen the ‘Tail End Charlie’ rally pass through in 2007. Her name was Terri-Anne and she said that her parents lived at Wheatvale on the Cunningham Highway and she was sure they would love us to choose their property for a bush camp after Goondiwindi.  Calls were made and we were welcomed by Jim and Marion O’Leary further down the track.

As we travelled the highways and byways during these past few days we enjoyed seeing lush crops, healthy stock and generally a great looking country.  At various times we have been amazed by the amount of ‘road kill’ along the way, not only the poor old Kangaroo which often seems to be in the wrong place at the wrong time but also goats, pigs, cattle, sheep, lizards, emus and birds to mention a few.  At times though, we still say we just do not believe how few sightings of live wildlife there are but then in saying that, there seems to be times when they are everywhere. 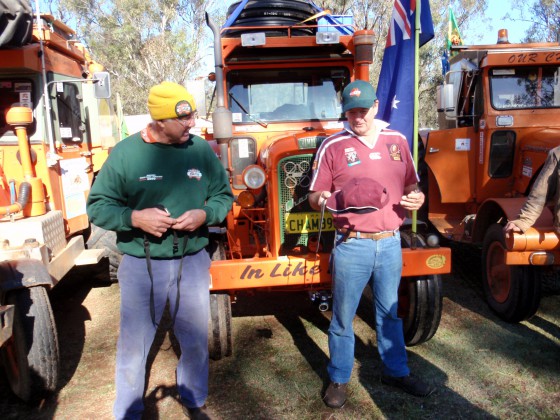 Cedar with Jim at Wheatvale. 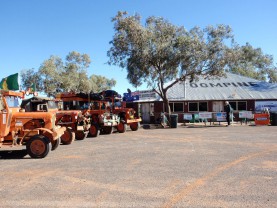 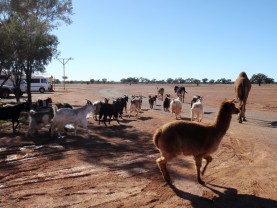 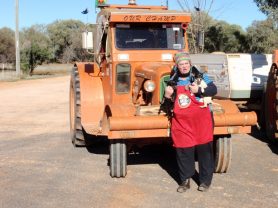 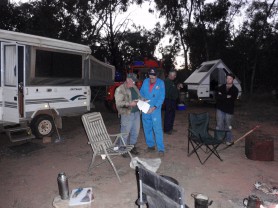 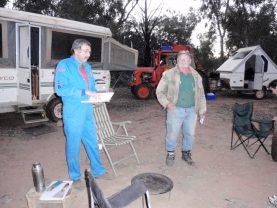 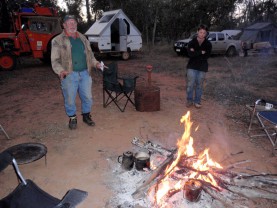 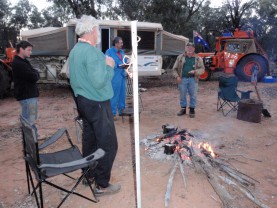 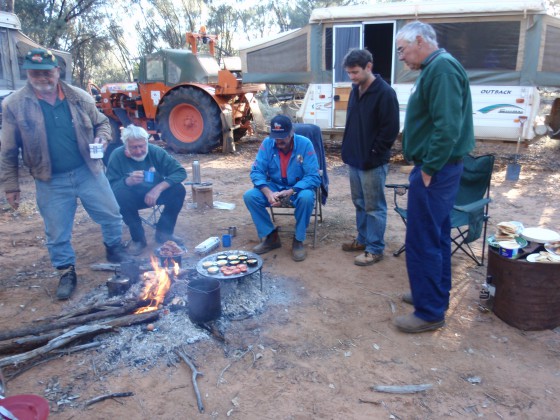 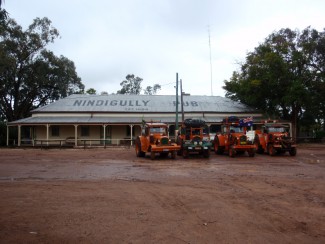 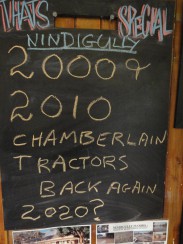 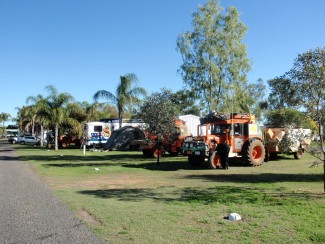 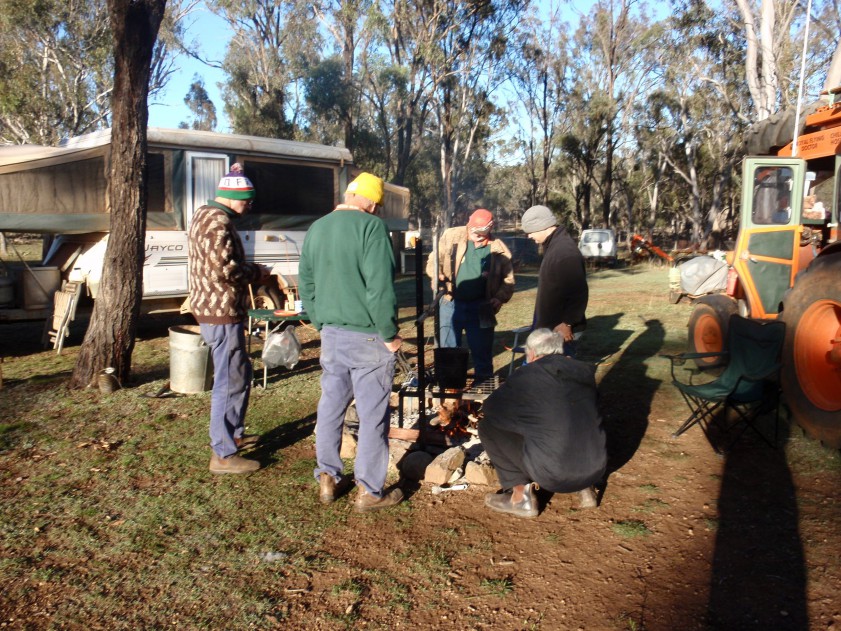